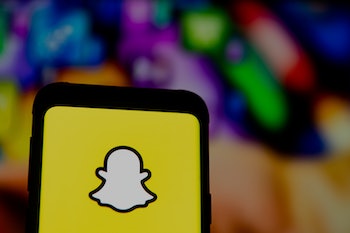 Snap today announced a slew of new features during its annual Snap Partner Summit, which this year was a remote affair with live-streamed sessions. Among the changes, Snapchat is introducing an actual navigation bar, new interactive lenses that make it easier to maintain friendships under quarantine, and brief "Happening Now" updates on breaking news stories.

No sacred cows — The most immediately noticeable change users will see is the addition of a navigation bar. Snapchat was for years viewed as unintuitive and too hard for older people to use due to its "complicated" interface that relies on lots of swipes to navigate.

Some believed that Snap intentionally made the app this way to scare away boomers and preserve its youthful userbase. But nothing is sacred, apparently, and Snap needs to keep growing that userbase, so now, well, you've got a navigation bar. It's a pretty straightforward navigation bar that sits at the bottom of the app, but Snap says it'll change contextually based on what you're doing or watching.

Snapchat Minis and Dynamic Lenses — Snapchat is also bringing new interactive experiences to lenses. The company describes Snapchat Minis as a way to "empower new, social experiences." One example is that you can find a show time for a movie playing nearby and then send the details to your friend as a sticker on a Snap so they can book tickets for the same time.

That's obviously not a great use-case right now, but the meditation app Headspace has also partnered with Snap so friends can encourage one another to practice some mindfulness and get into a meditation exercises together, which could certainly be useful right now. The Headspace partnership will also give users tools to send encouraging messages to their friends at a time when anxiety and stress around the world is elevated due to the simultaneous coronavirus pandemic and Black Lives Matter protests.

All the Minis can be found in Chat alongside games. More should be on the way as developers start to play around with the technology.

Dynamic Lenses are a bit different and allow users to bring real-time information into their Snaps. You could, for instance, start a group hangout on Houseparty and put a sticker in your Snap inviting a friend to tap through and join.

Happening Now — Snapchat already offers news content in Discover, which it says has been viewed by over 125 million people in 2020. Now the company is working with news organizations to create news updates in the form of single Snaps so that news can get to its users faster.

These new "Happening Now" updates are pretty simple. When you open Discover you'll see a section at the top that displays single-Snap updates on big stories happening around the world. There will also be a personalized weather snap.

Snap decides which content it runs — Snap, unlike Facebook and Twitter, is a closed platform when it comes to news and only allows selected partners to produce news for Discover. The company has largely avoided claims of propagating fake news for this reason — Snapchat even stopped promoting President Trump's official account through Discover last week because of dubious content he posted on Twitter and Facebook. Snap says it's partnering with organizations including The Washington Post and BuzzFeed News to turn updates on big stories into single Snaps.

Several other updates are coming geared towards developers, like the ability to integrate Snapchat lenses into other apps and bring a user's Bitmoji to games across different platforms including consoles and PCs. Snap is introducing a game created in-house that allows the app's collective userbase to build a collaborative collage together, with their Bitmojis plopped directly into the game.

Snap recently began allowing developers to integrate Stories into other apps. These types of integrations could help the company continue growing its userbase as its product gets introduced to more people.

The company had a strong first quarter in 2020, bringing in 44 percent more revenue than the same time a year ago. Its active users grew 20 percent over the previous year, too. The coronavirus pandemic may have a more pronounced impact on the current quarter, though. Even if that's the case, Snapchat no doubt expects the summer combined with a heap of new features could have it back in good shape soon.