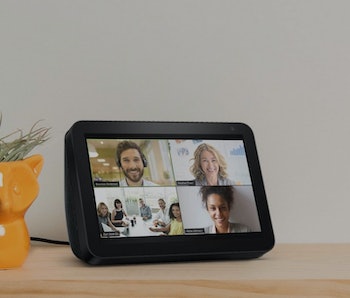 It’s about to be easier than ever to jump into a Zoom meeting. The company behind the wildly popular video-conferencing software today announced its intention to bring the “Zoom For Home” platform to Facebook, Amazon, and Google smart displays in the next few months.

With the vast majority of the U.S. still working from home, frequent Zoom usage has reluctantly become a new normal for many of us. It’s honestly a little surprising the software hasn’t already been made available for most smart displays, which are quickly becoming a household staple.

The expansion marks the next part of the “Zoom For Home” initiative, which launched last month with the Zoom For Home — DTEN ME, a $599 touchscreen pre-installed with Zoom’s software. Soon there won’t be any room left to escape those virtual happy hours.

The Zoom you know, but customized — Zoom is in the process of creating unique software for each brand of smart device. That software will be customized to utilize each brand’s hardware to the best of its abilities.

On Facebook’s smart screen, for example, Zoom will take advantage of the Portal’s Smart Camera tech, allowing the call to follow you and keep you in the frame. The Echo Show will allow users to join scheduled meetings hands-free with a simple, “Alexa, join my Zoom meeting.” Similarly, Google’s Nest Hub Max will let users join calls with Google Assistant’s voice commands and use Face Match to keep track of multiple users’ information.

There’s no escape — At the start of the COVID-19 pandemic, Zoom was something of a novelty — an easy-to-use video-conferencing application with space for huge numbers of participants. Initially, companies like Facebook and Google tried to change their existing video calling software to be more appealing to Zoom users. Google made its enterprise conferencing solution, Meet, free for everyone, and baked the application into Gmail. Facebook created Messenger Rooms and attempted to market it as a more casual alternative to the professionalism associated with Zoom.

Nonetheless, Zoom has prevailed in its ascent to market dominance, despite the company’s many security and privacy scandals. Google and Facebook have stepped back on the intense marketing of their own video-calling products and are now allowing Zoom to create customized versions of its software for their smart displays. It’s a sign that these companies understand, now, that Zoom isn’t going anywhere anytime soon. Guess it’s time for the rest of us to get used to the idea, too.