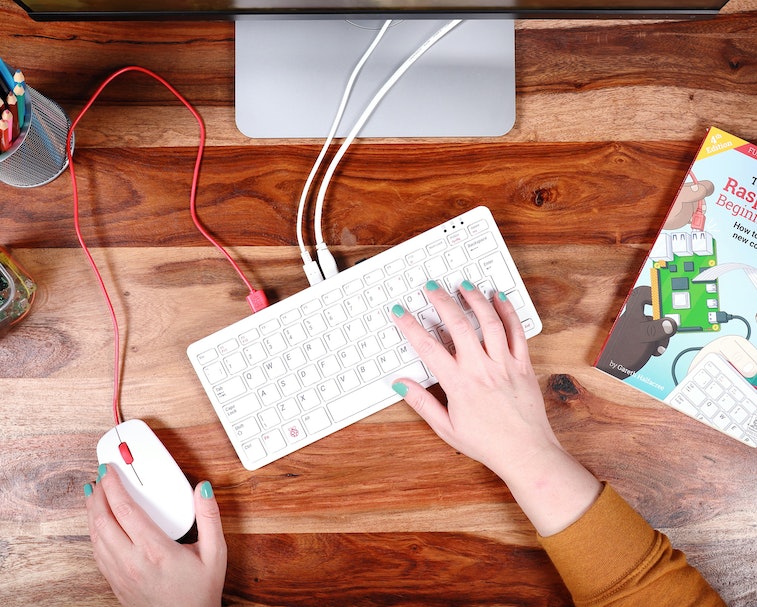 When it comes to modern computing, it’s easy to believe everything is expensive MacBooks and bulky gaming PCs. In fact, computing components have become so effortless to produce that consumers can now purchase a fully capable machine for pennies compared to the competition.

Raspberry Pi has long offered affordable, compact options for computing, and its latest offering, the Raspberry Pi 400, is the company’s most user-friendly product yet. The device — which from above appears to be nothing more than a slick white keyboard — has enough computing power for your daily internet browsing plus some.

All you need to get started is $70 and an external monitor. The Raspberry Pi 400 is modern computing at its best: affordable, approachable, and infinitely customizable, too.

Just plug it in and go — Raspberry Pi’s mission has always been to create low-cost, low-overhead computing products. For the most part, though, Raspberry Pi machines have had a very DIY feel to them — perfect for the tech-savvy but perhaps a bit intimidating for someone who’s never touched a computer’s innards.

The Raspberry Pi 400 is only a slight pivot for the company, but it’s a refreshing one at that. Rather than being faced with the prospect of putting together a working machine themselves, the 400 is all ready to go out of the package. It’s just as easy as buying a Windows PC, but at a fraction of the cost.

The 400 runs on 4GB of RAM and a micro-SD slot for storage. There’s no shortage of ports here: two USB 3.0 ports, one USB 2.0 port, a USB-C port for power, two micro-HDMI ports capable of 4K output, and a Gigabit Ethernet port, too.

The Raspberry Pi 400 isn’t an all-purpose machine; there’s no chance it’ll run the latest graphics-hogging video games, for example. But then again neither can a MacBook.

The Raspberry Pi 400 is open for pre-orders now, and it’s estimated to begin shipping in early February 2021 (which is a little confusing, seeing as the company calls it the perfect "Christmas morning" product). For $70 you can grab just the machine itself — a $100 kit will also include a wired mouse, a 1-meter micro-HDMI to HDMI cable, a 16GB micro SD card with the Raspbian operating system pre-loaded, and a Raspberry Pi Beginners Guide book.