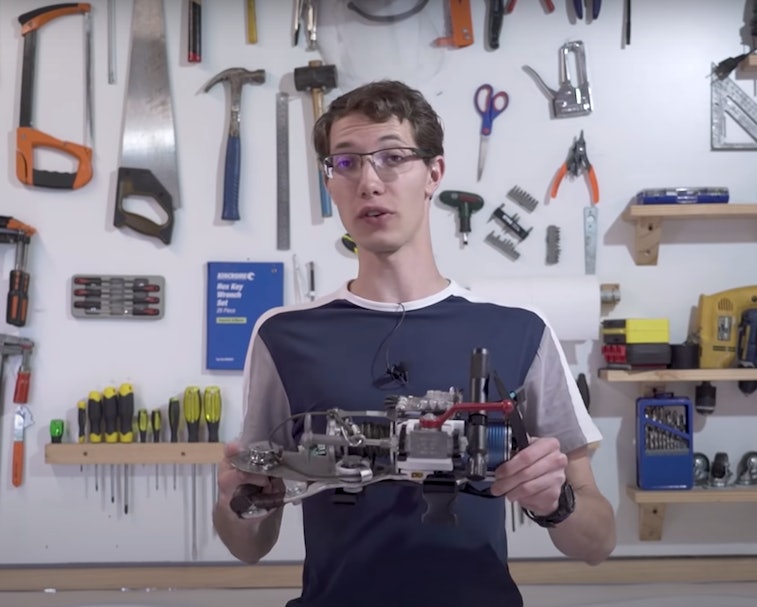 Creating anything at all in this mess of a year is something to be proud of — building something cool that also actually works is straight-up incredible. So when a working prototype of a Batman-style grappling gun showed up on our feeds, we almost couldn’t believe it.

Built IRL, a YouTuber whose real name is JT, created a grappling gun for which the word “impressive” would be a severe understatement (h/t The Verge). We’re not talking about your run-of-the-mill piecemeal prototype — this is a real grappling gun that’s able to pull JT’s full body weight into the air. It can even ease him back down to Earth, too.

JT’s grappling gun is a video game fantasy brought to life with some talent and an entire year of dedicated hard work. No, it’s not practical — and that’s why we love it.

A year-long journey — While most of us sat around in our underwear watching reruns of The Real Housewives of New York and scrolling through takeout options, JT engineered a working grappling gun. His journey began in November 2019, when he created a very rough concept gun in collaboration with Hacksmith Industries.

The grappling gun has come a very long way since its first inception. A lightweight aluminum chassis houses the gun’s many components, including an 800 psi CO2-powered launcher, a 10,000 W motor, and the grappling hook itself.

JT fully tested his grappling gun for the first time at an indoor trampoline gymnasium. And lo and behold: he was able to propel himself upward and forward. A success by just about any measure.

You're going to need strong arms — JT isn’t the first person to build a grappling gun, but he is perhaps the first to do so with this much success. In the end, though, his incredible prototype ends up being a reminder that grappling guns just aren’t very useful.

Here’s the main problem with them: there’s a good chance using one will feel like your arm is being ripped free from your body. JT is strapped into a harness for much of his testing to avoid his arm literally being yanked out of its socket — perhaps not the most practical for everyday use.

It’s also quite difficult to control the grappling gun, both in aiming its hook and in swinging around afterward. Probably best not to rely on this one for real-life escapades; we'll stick to swinging around in Assassin's Creed instead.

Still, JT’s prototype is really, really cool, and it leaves us feeling excited for his next project: a Spider-Man web shooter. Which is probably even less practical than the grappling gun, but arguably even more fun.