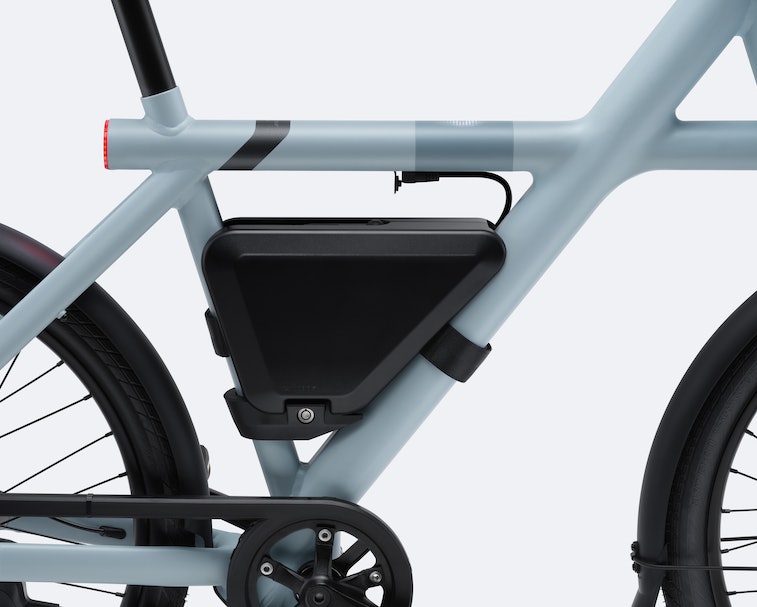 Dutch company VanMoof’s electric bikes have taken the world by storm in the last year or so, and that expansion is nowhere near done just yet. Today the company announced the PowerBank, a removable battery pack that adds an extra 34 miles of range to VanMoof’s S3 or X3, for a total range of 62 miles.

Like all e-bikes, VanMoof’s lineup is somewhat limited by its reliance on electricity. A full charge of the S3, for example, will last somewhere around 28 miles; while that’s plenty for a few casual commutes around the city, it’s less usable for long cycling trips through the countryside. Add to that the fact that you have to lug the entire bicycle up into your apartment every time you need to charge it and you have a recipe for some general usability frustrations.

The PowerBank solves these quotidian issues — and it manages to look sleek as hell while doing it, too. That’s something we’d like more of from every e-bike company.

Okay, but it’s expensive — The PowerBank won’t add much bulk to your S3 or X3; it weighs in at just 6.2 pounds and straps on with covert velcro straps. For a 378 Wh battery, that’s pleasingly compact. The PowerBank doesn’t feed the bike directly; instead, it transfers charge from its stores to the bike’s internal battery.

There’s one caveat to all this added power: price point. The PowerBank costs about $350 on its own, which is a significant chunk of cash for a battery. For a new rider, that brings the total of the S3 or X3 up to nearly $2,500 when all is said and done.

Whether or not the PowerBank is worth that price will likely come down to how you use the bike. If it’s easy enough for you to bring your S3 or X3 indoors to charge, and you’re just riding it on short trips around the neighborhood, a $350 battery pack may not be worth it. As more of a car replacement, though, it’s totally worth that price.

Refinement all around — VanMoof also announced some minor, detail-oriented updates to both the S3 and X3 bikes, continuing with what it calls its “the-bike-is-never-finished” philosophy. Both the S3 and X3 now have better visibility on their Matrix Displays, and internal wiring in both models has been improved. Fender flaps and pedals have received slight redesigns on both models as well. And earlier this month, the company announced its bikes now support Apple’s “Find My” service.

VanMoof’s commitment to continually improving both its hardware and the accompanying software is impressive. The company’s customer base has grown more than five-fold since 2019 — and 2021 is set to bring VanMoof bikes to more than 40 new cities in the near future. Now that’s some serious momentum.