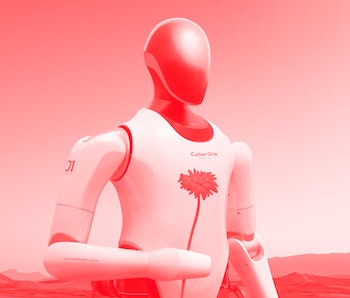 Xiaomi has been on quite a roll of making the weirdest tech it can cook up. We recently saw a mind-reading headband that probably isn’t making it to market, as well as over-the-air charging that’s just waiting for its first compatible device.

On the weirder side of things, Xiaomi unveiled its Cyberdog with eerily realistic movements last year. Now, Xiaomi is raising the bar with the CyberOne humanoid robot.

Lei Jun, founder and CEO of Xiaomi, showed off four photos and an on-stage demo of the CyberOne. There’s even a damn origin story for when this thing eventually enslaves the human race.

From the live demo, it looks like the Xiaomi boy can walk, but honestly, it’s more like a hobble. It can also do “kung fu,” and by that we “mean strike a weird pose.” Jun even tests the CyberOne’s patience by taking not one, but two selfies. Maybe I’ve watched too many sci-fi movies, but that’s definitely where I’d bet the CyberOne turns on us all. Hey, at least Xiaomi didn’t bust out any jumpsuit-clad choreography like Tesla’s Optimus “unveil.”

The CyberOne is a fairly sophisticated humanoid robot since it can detect human emotions and even comfort you when you're sad. All said, it can recognize 85 types of environmental sounds and 45 classifications of human emotion, according to Xiaomi. The CyberOne also has advanced vision capabilities and can create 3D virtual reconstruction of the world around it.

We can see in the demo that the CyberOne still walks around a bit clunkily, but it was built with 21 degrees of freedom and a real-time response of 0.5 milliseconds for each degree of freedom. With that design, it can fully simulate human movements, which is a little creepy to think about.

Xiaomi against the world — With the announcement of the CyberOne, It seems like Xiaomi is pretty serious about robotics at this point. Jun says in the press release that the company has invested heavily in robotics R&D, ranging from software, hardware and algorithms. Judging from the CyberOne name, it sounds like Xiaomi has some more robotics plans in the future.

It’s a bit wild to think that a company known for its smartphones has expanded into so many high-tech categories. Xiaomi has clearly shown it’s not afraid to go against established competitors in the market, whether it be Tesla for AI, Samsung for foldable smartphones, or even Google and Apple for AR glasses.