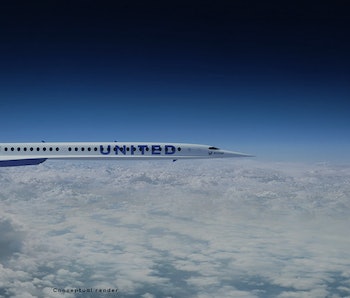 United Airlines today announced that it plans to purchase 15 super-fast “Overture” jets from Denver-based startup Boom Supersonic, with the possibility of buying 35 more in the near future. The jets are quite literally supersonic — they have the ability to fly faster than the speed of sound, with the ability to ferry passengers from New York to London in just four hours.

This alone would be monumental, but United dropped more big news, too: The Overture will be the first large commercial aircraft to fly on 100-percent sustainable aviation fuel from day one. The Overture fleet will be able to cart passengers at high speeds without negatively impacting the environment in the way a traditional plane would.

“Boom’s vision for the future of commercial aviation, combined with the industry’s most robust route network in the world, will give business and leisure travelers access to a stellar flight experience,” said United CEO Scott Kirby. “Our mission has always been about connecting people and now working with Boom, we’ll be able to do that on an even greater scale.”

If United manages to get the fleet ready for the public by 2029 as it hopes to, it would be a landmark service for mainstream air travel — but that’s a big if. There are some major caveats involved with launching a supersonic air travel service — all of which United conveniently skipped over in making this announcement. We might as well be attempting to fly our cars.

Let’s talk about supersonic travel — Research into supersonic air travel has been ongoing since the mid-20th century, with most of it concentrated on military operations. There have only ever been two supersonic commercial aircraft: the Soviet Tupolev Tu-144 and the British-French Concorde. The reason supersonic travel has never really taken off — despite its promises of ultra-fast arrival times — is that the downsides of the technology very often outweigh the benefits.

For one thing, there’s the sonic boom, the massive sound created by shock waves when you travel faster than the speed of sound. This can create loads of discomfort for passengers and often makes take-off a very noisy affair for those nearby, too. Many airports passed on the Concorde for this reason alone.

Supersonic aircraft are also very expensive for airlines to operate and, as a result, it’s very expensive for passengers, too. A round-trip flight from New York to London in 1997 cost a whopping $7,995 — close to $13,000 today with 2021 inflation taken into account.

A moonshot for sure — United’s plans have pre-empted one of the Concorde’s most pressing issues — its environmental impact — but there are plenty more details that need to be worked out.

In order to fully utilize these jets and carry passengers at speeds of Mach 1.7, United will need to confront the sonic boom and high operational costs head-on. The company has set its sights on flying the Overture in 2026 and carrying passengers by 2029, but there’s a lot of planning to be done before then. Otherwise, it will likely go the way of the Concorde: fun for rich folks for a while and then rusting in a junkyard when the program never really takes off.