Despite controversies, Netflix is raking in the cash right now 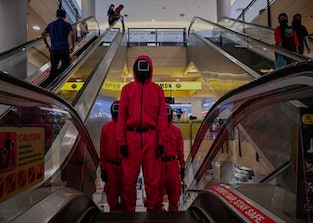 The number of Netflix subscribers worldwide.

Netflix reportedly beat its own estimates during the last financial quarter, gaining almost 1 million more new customers than anticipated and garnering $7.5 billion in revenue alongside $1.4 billion in profit for Q3 2021, according to a new report from The New York Times. Judging from the record-shattering success of the South Korean sci-fi thriller series, Squid Game (which debuted in the last week of the past financial quarter), those numbers are sure to grow throughout the rest of the year, too.

Meanwhile, the streaming giant continues to face massive backlash over its CEO’s handling of the controversies surrounding Dave Chappelle’s final standup special with the service, which features a lot of queerphobic material. A mass walkout protest organized by trans Netflix employees and allies is currently underway, and our fingers are crossed that the execs are paying attention.

This quarter is predicted to be even better — Given that Squid Game’s debut arrived at the absolute tail-end of Q3, we won’t know exactly how huge its windfall will be for the company for a few more months. That said, there’s absolutely no question the series’ record-breaking success will be a boon for the company. Already, Netflix is predicting 8.5 million new customers to help usher in another $365 million in profits alongside $7.7 billion in sales.

Netflix’s expansion continues — With these kinds of numbers, it’s unsurprising to learn that the streaming company is planning to enter into new markets, notably video gaming. Earlier this month, Netflix acquired the gaming studio, Night School Studio, and has already helped produce a VR title called Eden Unearthed. Hopefully its work in the gaming sector won’t be as... um... polarizing as its standup specials.

Well, come to think of it, it also recently acquired an exclusive partnership with the estate of noted antisemite, Roald Dahl... so we wouldn’t be terribly surprised if at least some of those games aren’t a tad offensive.