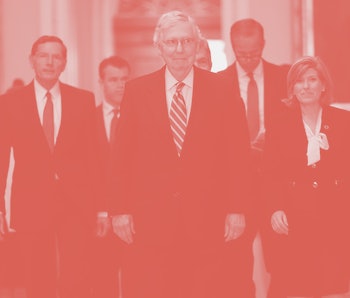 Google will not allow politicians to run ads across its platforms beginning when polls close on election day and continuing for an indefinite period of time, the company announced today in a blog post. The confirmation follows rumors of the move reported by Axios a few days ago after Google emailed advertisers Sunday to prepare them for the change.

The search and advertising company's move here is part of its “Sensitive Events” policy, which states it will not allow ads that “potentially profit from or exploit a sensitive event with significant social, cultural, or political impact.”

Amanda Storey, Google’s Director of Trust and Safety, writes in today’s blog post that the decision was made “given the possibility of delayed election results this year (and to limit the potential for ads to increase confusion post-election).”

The move is significant, given Google’s supremacy over internet advertising as a whole. It follows a similar decision by Facebook, one of the web’s other top advertising platforms. Both companies have built advertising empires that allow information to be disseminated with speed and efficiency — leaving open the very real potential they’ll be used to spread misinformation or other dangerous messages.

Preparing for the worst — Google owns an absolutely mind-boggling 80 percent of all search traffic in the United States — an amount so significant that the Department of Justice believes it constitutes a monopoly. While Google doesn’t exactly agree with that sentiment, it’s undeniable that between Search and other properties like YouTube, the company’s ad empire is basically ubiquitous at this point.

Google is well aware of its power. In an election where every horrifying potential situation must be accounted for, it’s unequivocally the right move for Google to reckon with that power by banning ads from politicians after the election. Really it’s the bare minimum it can do.

Maybe they should just be banned forever? — By banning political ads as a safety precaution, both Facebook and Google are admitting they’re aware of their respective advertising tools’ capacity to be used with malicious intent. But instead of mitigating that harm on a permanent basis, both companies have decided to do so temporarily. After all, there are profits to think of. Shareholders to enrich.

But that's a little disingenuous. Both companies could ban political advertisements entirely if they wanted to. Twitter took that route last year and its profit margins seem to be doing just fine.

So yes, politicians (and by "politicians" we primarily mean the incumbent reality TV star and failed businessman) won’t be able to contest election results using ads on Google or Facebook. But after the companies deem it safe to allow them to do so again, politicians will be lining up once more to spread whatever propaganda they want to. Because not doing so would be leaving money on the table. And neither Google nor Facebook got to where they are by doing that, even if there was a greater good at stake.