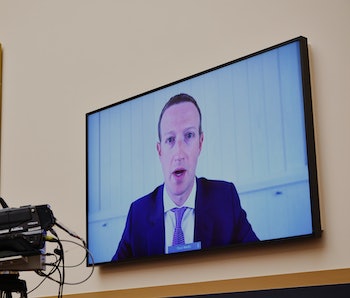 Mark Zuckerberg has been lobbying against TikTok — and other apps made in China — to U.S. government officials, including President Trump, according to people familiar with the matter. The Wall Street Journal reports that, when Trump and Zuckerberg shared a private meal last October, Zuckerberg spoke at length about how the rise of Chinese internet companies threatens American business.

The Facebook CEO’s personal concerns with Chinese companies endangering his own company’s supremacy is nothing new; Zuckerberg has spoken at length about the “threat” of TikTok in both public and private communications in the past. Now it’s clear that Zuckerberg has also been pushing this narrative in private, to those with immense influence, as well.

Of course, there’s no way for us to know how much Mark Zuckerberg actually influenced Trump and his administration — but Zuckerberg is one of the most powerful people in both the technology sector and in the world writ large. His sway over the Trump administration’s narrative against Chinese technology is undeniable.

Influence and consequence — Zuckerberg’s push against the rise of Chinese technology has not been limited to reaching out to the President. According to WSJ’s sources, Zuckerberg has met with “several senators” about the issue. These meetings set off a series of alarms through the U.S. government.

Zuckerberg met with Sen. Tom Cotton of Arkansas in September to speak about TikTok’s threat to national security. Just one month later, Sen. Cotton, along with U.S. Senate Minority Leader Chuck Schumer, wrote a joint letter stating that TikTok could be used “to support and cooperate with intelligence work controlled by the Chinese Communist Party.”

Before long, the government had opened an official investigation into TikTok’s connections to China, putting its parent company, ByteDance, on the defensive. A few short months later, Trump began rallying against the app and others made in China, eventually leading to the ticking clock that’s currently counting down to a total ban on TikTok in the U.S.

Facebook has a lot to gain here — The Trump administration’s reasons for the imminent TikTok ban are ostensibly about national security. Zuckerberg’s involvement in this mess makes it glaringly obvious that this is all about business supremacy.

Mark Zuckerberg is concerned about TikTok because it’s immensely popular. TikTok has swiftly become one of Facebook’s biggest competitors in the social media market — of course Facebook’s CEO should be worried about that. Sheryl Sandberg, the company’s COO, has made statements confirming that Facebook sees TikTok as a threat to its market dominance.

It’s not surprising at all that Zuckerberg would attempt to sway the government’s opinion about TikTok toward the extreme. With TikTok banned in the U.S., Facebook — and its subsidiary Instagram, which just launched a TikTok clone called Reels — would once again be the de facto winner of the social media market in the United States.

Elsewhere, Facebook is currently being investigated for anti-trust violations, including the use of underhanded techniques to beat out competitors and gain market dominance. Its strategy may have backfired this time, though; if either Microsoft or Oracle purchase TikTok’s U.S. operations, the app’s popularity won’t be slowing down any time soon.