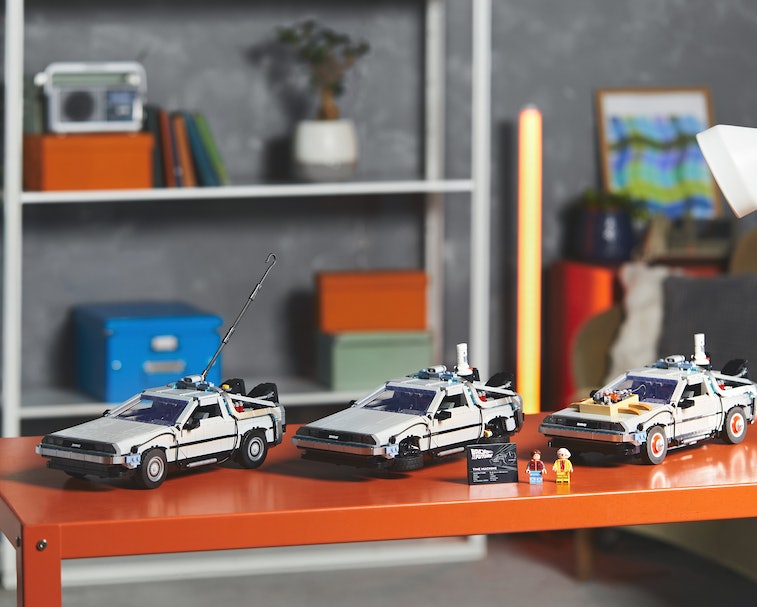 Lego’s new Back to the Future homage may be the closest you’ll ever get to owning an actual time machine. A new three-in-one set features three distinct builds of the iconic DeLorean time machine from the movie series and comes equipped with pretty much everything but time-traveling capabilities.

With a total of 1,872 pieces, the set gives you the option to recreate whichever version of the DeLorean time machine from the trilogy spoke to you the most. Of course, Lego didn’t forget Dr. Emmett Brown and Marty McFly who are included as minifigures. It might not be as grandiose as some of Lego’s other classic sci-fi movie sets, but they really nailed all the little details with this one.

Faithful adaptation — No matter which version of the DeLorean you decide to build, Lego includes all the features that makes them unique. You get the lightning rod and plutonium chamber as seen in the first movie’s design, the Mr. Fusion and fold-down hover conversion tires from the second film, or the whitewall tires and circuit board on the hood from the final feature of the trilogy.

There’s one caveat though — you can’t build all three versions at the same time from a single set because they share similar Lego elements. If you do feel like mixing it up, it’s pretty easy to rebuild the DeLorean into the other styles, however.

Just like the real DeLorean, Lego included gull wing doors that can be popped up to reveal all the tiny details on the dashboard. The set also has a flux capacitor that was the core of the time machine, but you won’t need 1.21 gigawatts to power it up since it’s just a light-up Lego brick. Besides the minifigures, Lego included the “OUTATIME” license plate, Marty’s hoverboard and a box of plutonium to really round out all the callbacks.

April availability — We’re hoping it’s not an April Fool’s joke, but Lego said they’re releasing the set on April 1. The price is set at $170, which is a little on the steeper side compared to some of its recent sets, like the $20 Lamborghini Countach set and the $70 Sonic set.

This is actually the third Back to the Future set that Lego has done, following two smaller sets released in 2014 and 2017. The attention to detail they give this set is really hard to pass up.