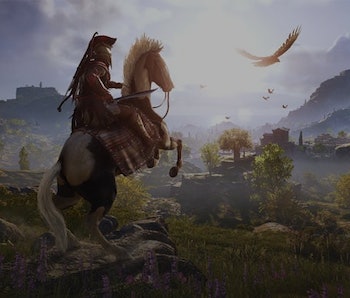 Ubitus, the company that’s made possible the release of the Nintendo Switch’s first cloud-based game, says Control might only be the beginning of its work with Nintendo.

In a press release, CEO Wesley Kuo said: “We are thrilled to present their most recent mega title 'Control Ultimate Edition — Cloud Version' to a global audience on Nintendo Switch, featuring the highest game play quality and performance, including ray-tracing. We will continue our efforts to bring more and more exciting major titles to the cloud and share with gamers around the world.”

More exciting major titles — talk about a tease. With no further information on the matter, it’s probably best to quell our excitement for now, as there aren’t any guarantees that Ubitus will succeed in its efforts or that Nintendo will allow for subsequent cloud-based releases. Still, the tease is enough to get our adrenaline pumping and our imaginations doing overtime.

Baby steps — Unlike most of the gaming industry, Nintendo has been reluctant to jump into the cloud gaming market. That isn’t exactly surprising. Nintendo is infamous for carving its own path, which often diverges from contemporary trends. it's also notoriously insular and maintains fierce control over its properties. So even one game’s cloud-based release is something to get excited about.

Cloud gaming isn’t as new to the Switch as players in the West might believe, though. Nintendo has allowed cloud gaming for the Switch in Japan for years — huge titles like Assasin’s Creed Odyssey and Resident Evil 7 are available on the Nintendo eShop in Japan, and they’re said to run well, at that. It helps, of course, that Japan has excellent internet connectivity, which is a prerequisite for a solid experience. Those titles are also powered by Ubitus.

Leading the pack — In case you're wondering, Nintendo isn’t actually creating a dedicated cloud gaming platform for the Switch à la Game Pass . Rather, Nintendo is allowing third-party companies to use their own cloud backends to stream on the Switch.

Ubitus, which is based in Taiwan, is by far the most prolific cloud gaming company working with Nintendo thus far. The company doesn’t actually create games from scratch. Instead, it partners with game creators to bring cloud capabilities to their products.

Umm, there’s also this — Ubitus is obviously making monumental moves in the gaming industry, in turn giving Switch fans hope for a cloud-based future on the console. So it’s a little surprising to report this, but…the Ubitus website is straight out of a time warp.

Maybe Ubitus is so busy with its cloud servers and partnerships that it hasn’t had time to update its website design in a decade. The most recent press release about Control is here, but other sections of the site — like the company’s milestone timeline — cut off at the end of 2018.

Web design aside, we’re pumped for Ubitus to keep bringing prestige titles to the Switch. Control is available now on the Nintendo eShop in North America, Asia, and parts of Europe.