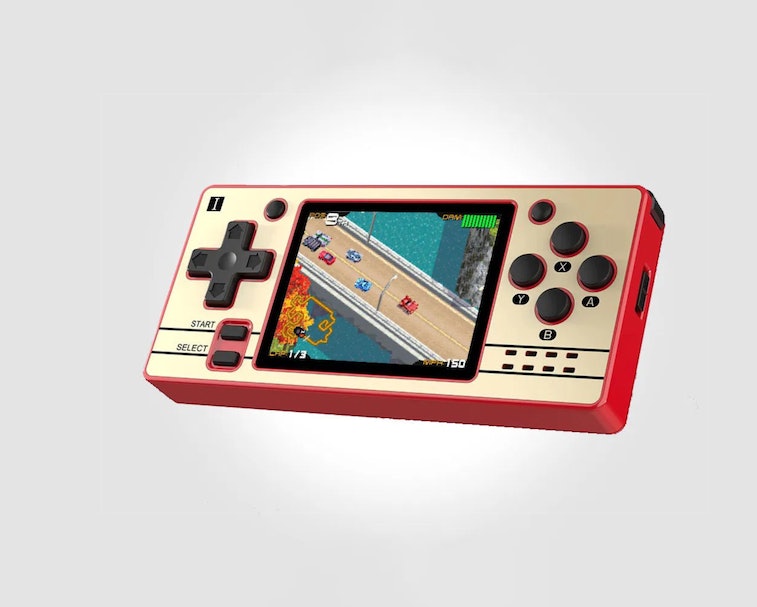 While the Switch awaits its (disappointing) OLED upgrade, manufacturers are cashing in on the current lack of truly portable gaming handhelds from the likes of Nintendo or Sony. Despite some necessary technical know-how, zero marketing budget, and absolutely no exclusive games, the call for a true Game Boy successor remains.

To meet the demand, manufacturers like Anbernic and Powkiddy have pumped out units like the RG351M, able to emulate a variety of handhelds and console platforms from Nintendo, Sony, and Sega up through the Dreamcast era. The latest trend is to style these units like the iconic Famicom-themed Game Boy Advance Micro.

Advance — Anbernic’s leaked RG300X is basically an RG350M without its analog sticks — which will likely keep the cost per unit down. It supposedly sports a 3-inch LCD screen with a 640 x 480 resolution. Like many of Anbernic’s other offerings, it has dual MicroSD slots (one for the OS, one for the game ROMs) and dual USB-C ports (one for data and one for power) as well as an HDMI port.

Micro — Powkiddy’s version is called the Q20 Mini and comes with a smaller 2.4-inch LCD display with a 320 x 240 resolution. It uses a USB-C port for data and charging, offers a supposed 4 hours of battery life on a single charge of its 1200 mAh battery, and features a headphone jack (take that, Apple). It’s going for just $40 on AliExpress.

Nintendon’t — With these units flooding digital store shelves, as well as Analogue and Panic preparing their own handheld offerings, it’s certainly strange that Nintendo hasn’t tried to make a Game Boy Classic. Its previous retro consoles, the NES and SNES Classic were massive hits for the company. It’s increasingly strange the Nintendo continues to ignore the booming demand for retro gaming and in the (truly portable) handheld category.