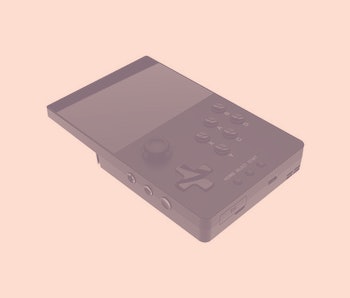 The Analogue Pocket, which was announced in 2019 and then delayed from its May 2021 release to October, has more buzz than Nintendo’s meh Switch (OLED model). It’s easy to see why.

With a cartridge slot and adapters that are sold separately, the Analogue Pocket can play games from every handheld since the late ‘80s right up to the Nintendo DS, including everything from the Game Boy and its descendants to lesser-known consoles like the Atari Lynx and the highly underrated Neo Geo Pocket Color.

Analogue, though, hasn’t been forthcoming with a release date after two years after it was first unveiled. If you’re tired of Analogue’s arguably villainous ways, a new handheld emulator called the A20 from known emulator maker Powkiddy is here to ease the pain.

Not so little kiddy — The Powkiddy A20 is the latest handheld from the Chinese company of the same name, and, apart from extra buttons and a joystick, it looks incredibly close to the Analogue Pocket. Getting rid of the usually colorful designs of its previous handhelds, Powkiddy’s A20 matches the Pocket right down to the black color of the device and bezel to the three adjacent buttons on the bottom. Powkiddy’s even copied the Pocket’s backside where the triggers are located; there’s no cartridge slot on the rear, though.

While you can’t insert your favorite handheld cartridges into the A20 or hook it up to a dock, it’s a surprisingly powerful console running on Android 9. Inside the shell, the device has an Amlogic S905D3 SoC with a four-core Cortex A55 CPU (1.9GHz) and a Mali-G31MP2 GPU. The GPU handles several graphic APIs such as OpenCL 2.0, Open GL ES 3.2, and Vulkan 1.0. The device also has 2GB of RAM, 8GB of internal storage, and an expansion slot for a microSD card. The 3,000 mAh battery will reportedly last around 3.5 hours.

The 3.5-inch IPS display is plenty big for most gamers, but it also has a Micro HDMI port for video-out. I’ve seen other handheld emulators launch with video-out before only for the feature to not be functional at launch.

Other specs include a 3.5mm headphone jack, USB-C charging port, and Wi-Fi and Bluetooth. Overall, the Powkiddy A20 looks to be a solid handheld that can compete with Anbernic’s RG-351V handheld, which also has a vertical Game Boy-like design.

Emulation beast — Listing every console this handheld can emulate would be too long, but you can expect all the greatest hits from the ‘90s and early ‘00s including everything from the NES up to the Nintendo 64, PlayStation 1, Dreamcast, and the PlayStation Portable. Video from PowKiddy of the device shows test footage of someone emulating Monster Hunter Portable 3rd via the PSP emulator. The PSP is still a struggle for many handheld emulators, so to see such smooth gameplay is promising. Since the console has Wi-Fi and runs on Android, downloading other emulators, RetroArch, and Android games is likely a possibility as well.

The Analogue Pocket look-alike doesn’t yet have a release date or price, but Powkiddy mentions on its site “Powkiddy A20 is about to be sold.” The manufacturer says the console will begin production by the end of September, with news on the release date to follow after. It took Powkiddy two years to develop the A20, which is about the time the Pocket was first unveiled, so it tracks. If Analogue hadn’t dropped the ball with production, we’d all be playing on the Pocket and turning a blind eye to this clone. Sucks for Analogue if Powkiddy manages to beat the Pocket to a street date with the A20.