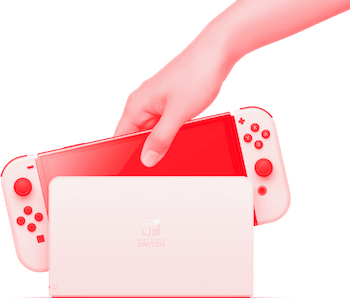 Beginning today (July 15) at 3 p.m. ET, the slightly upgraded Nintendo Switch (OLED model) will be available for pre-order in the United States. Nintendo officially announced the pre-orders this morning via Twitter.

Nintendo’s pre-order announcement is conspicuously short on details. The company’s tweet simply states that pre-orders will be opening today, but there’s no information on how exactly gamers can go about securing a console. Nintendo says simply that fans should “check with select retailers” for details.

If the next-gen console rollouts by Microsoft and Sony are anything to go by, getting your hands on the OLED Switch might be pretty difficult at first. But then again Nintendo’s new console doesn’t actually utilize much of the next-gen hardware that’s put the PS5 and Xbox Series X in short supply, so finding one may not be quite so difficult. Still, a pre-order is your best bet if you want one this year.

So…where can we buy it? — Great question! As Nintendo mentioned, you won’t be pre-ordering the OLED Switch directly through the company, which means you need to keep an eye on individual retailers’ websites. Both GameStop and Best Buy already have placeholder pages for the new Switch; we’d suggest refreshing those pages around 3 p.m. ET (noon PT) to check if pre-orders have officially opened.

Other major retailers like Amazon, Walmart, and Target are also expected to have pre-orders. Those companies haven’t listed anything at the time of this writing.

Twitter has proven itself a great place for moment-to-moment stock updates with other consoles, so we’d suggest searching there as the pre-order time approaches, too.

A minor upgrade — The OLED Switch is not for everyone, Nintendo has even fessed up to as much itself. For serious fans of the company, though, the new console does introduce some welcome upgrades. The biggest of those (pun intended) is the new 7-inch OLED screen that’s responsible for the new nomenclature. It should be a significant improvement to the console’s handheld experience both in terms of display quality and battery life.

That handheld experience will also be boosted by a new sound system. We don’t know exactly how good the new speakers are just yet; Nintendo’s teaser says simply that the audio is “improved.” There’s also a better kickstand with more adjustment levels.

The new Switch’s dock has also seen some minor improvements, like a wired LAN port for more reliable online gameplay if your Wi-Fi is unreliable. The dock also comes in white and has slightly rounded corners. You’ll be able to buy it as a standalone accessory if that’s the only upgrade you really care about.

We won’t really know how much supply Nintendo has ready to go until pre-orders open later today. If you’re dead-set on owning the new Switch before the end of 2021, though, we’d suggest reserving one as early as possible. Because scalpers are gonna scalp.