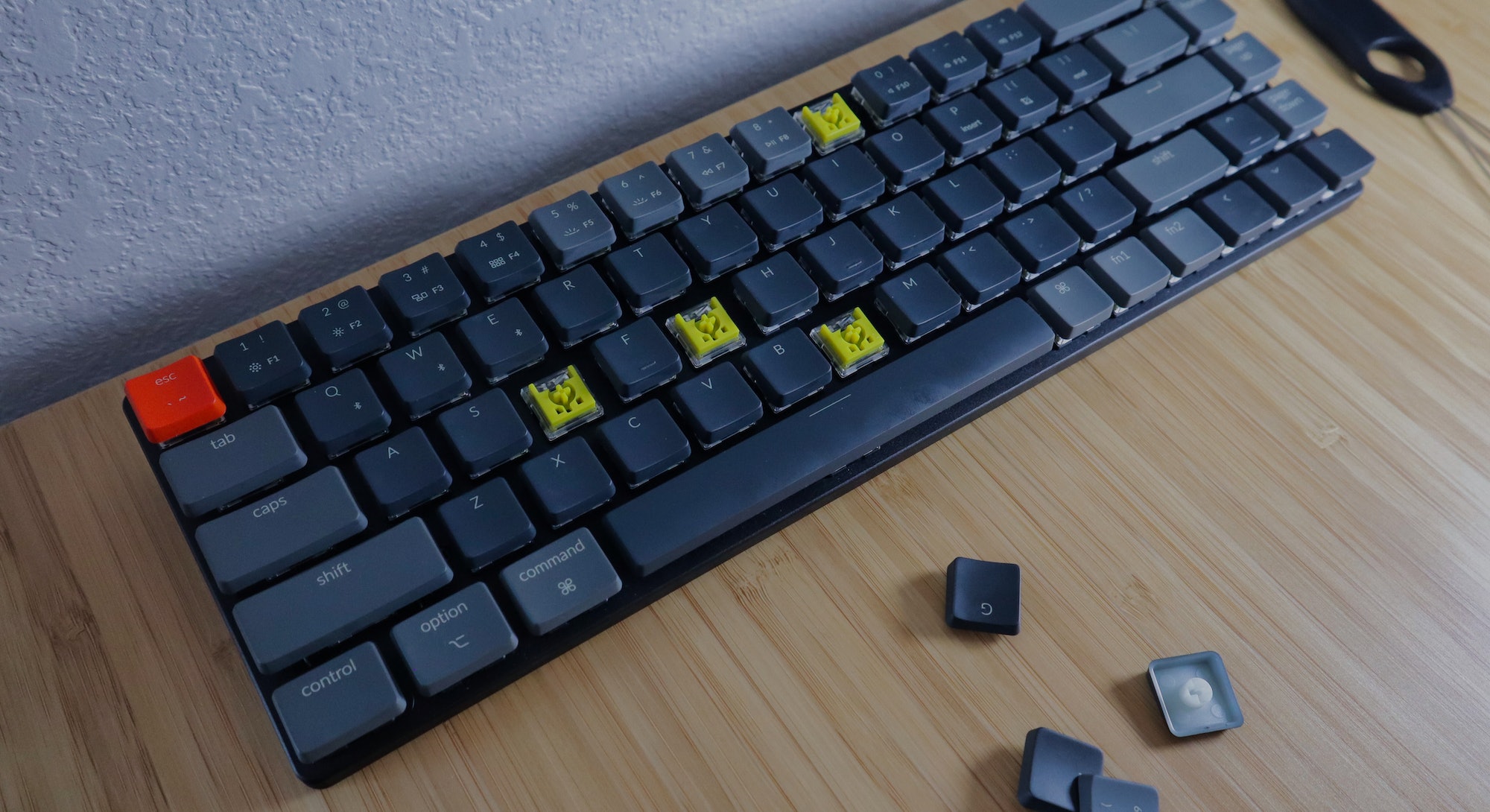 It’s slim pickings out there if you’re looking for a low-profile mechanical keyboard.

The Keychron K7, announced back in July, is a 65 percent keyboard that’s only 22mm (about 0.86 inch) at its thickest with keycaps (the rubber stoppers add another 2mm, which are not counted in the official height). The 68-key Keychron K7 has dedicated arrow keys, and two function keys to access media controls and lighting effects. There’s a ton of switch variety, and you can pick between three Gateron low-profile mechanical switches or five low-profile Keychron optical switches. The cheapest Keychron K7 configuration ($69) comes with soldered Gateron low-profile mechanical switches and white backlighting, but the most expensive model ($89) has hot-swappable switches (only swappable with the same brand) and RGB backlighting. If you’re the owner of one of Keychron’s other models, everything else is standard. Same gray-colored keycaps, switch for Bluetooth and wired modes, switch for connecting to Windows or Mac, and partial-aluminum case. There are no extra embellishments on the Keychron K7 — just a well-made mechanical keyboard from a company focused on making really great mechanical keyboards and nothing else.

The Keychron K7 is a great low-profile mechanical keyboard to replace a Magic Keyboard.

I’ve been using the Keychron K7 as my main keyboard for the past three weeks. Keychron provided me with two review units with different hot-swappable optical switches. As an owner of a Keychron K2, this new low-profile keyboard maintains the same level of quality packaged in a smaller frame. It’s not ideal for every situation, but I’ve found it versatile enough for all-day typing, editing video, and gaming.

The 65 percent form factor is my favorite of all the others, with (tenkeyless) TKL at a close second, and after switching from a 60 percent Anne Pro 2, it’s just so nice to have dedicated arrow keys again. If you’re familiar with Apple’s Magic Keyboard, the Keychron K7 has a similar layout, and it even comes with Apple-dedicated keycaps installed. Sit down my Windows users, Keychron also includes Windows-dedicated keys that you can quickly replace. Even the media keys are in the same location as the Magic Keyboard, and while you do have to use the Function keys, the legends are clear and easy enough to memorize. A big complaint with low-profile keys is that the flatter keycap design makes them more prone to wobbling, but these keycaps were solid in my testing. Overall, I enjoyed typing on the Keychron 7 day in and day out, especially with the new Banana switches.

The Keychron K7’s 65 percent layout is basically a smaller version of the TKL Keychron K1 and the 75 percent Keychron K3 with more switch options. Both the Keychron K1 and K3 boards have the option for red, blue, and brown low-profile mechanical switches, with the former supporting Gateron mechanical switches and the latter both Gateron and Keychron low-profile switches. The Keychron K7, however, on top of offering those six switches, has two new Keychron switches to choose from: Banana and Mint switches. I tested both of the tactile switches and came away impressed. The thing that makes these switches different is that the bump, which gives tactical switches their distinct feel, is placed at the top instead of the middle. So instead of feeling the bump after a bit of travel, you feel it at the beginning, which registers the keypress much sooner. It’s not new in the world of mechanical keyboards, per se, as we’ve seen it in the popular Panda switches, but the Mint and Banana switches may be the first low-profile switches of their kind.

The Banana switches were my favorite by far.

The Banana switches were my favorite by far. The yellow switches have a 57g actuation force (that’s the force the key requires to register a key press), which is just a tad higher than the 50g Kailh Box Jades, which are my favorite to type on. Something about feeling the bump earlier makes it so the switches don't feel so stiff, and the tactility didn’t get in the way when PC gaming. I played Half-Life 2 with the Banana switches and not once did I feel like I was being held back by the actuation force. Though, for shooters and high-reflex games, the bump and higher actuation force may throw you off. For single-player games, the Banana switches are just fine, and I didn’t see a reason to grab my “gaming” keyboard with Cherry MX Red linear switches. The one downside to this switch is not a big deal: I don’t particularly like how Banana switches sound. There’s no hollow ringing or anything audibly irritating, but the thinness of the board and keycaps don’t produce that deep, satisfying “thock” sound you hear on a well-built keyboard.

Mint switches didn’t feel as responsive due to their higher resistance, which quickly soured me on them. The 67g actuation force made it tiresome to type for longer periods, and the bump wasn’t as discernible since the bump and force required to register a keypress are very similar. To me, it felt like a really stiff linear switch, and I stopped using this board after about a week. Can you type with it? Sure, but not for long unless you’re fine with wrist fatigue. However, you cannot play games with the Mint switches. They’re too slow. I appreciate Keychron’s innovation with its low-profile switches, but 67g may be a bit much.

The different switches were new for me, but comfort is maybe the biggest change I experienced. The lower placement of the keyboard meant I had to adjust my typing form to adapt. The keyboard can lay completely flat, but it has two kickstands to adjust the height, which does make things better. I learned to live with it after a while, but resting my wrists on the edge of the desk became annoying after a while. If you wear a watch, as I sometimes do, the feeling of the band pressing onto the skin becomes noticeable when using the keyboard for longer sessions. I definitely missed my foam wrist rest, which was just too thick to use with the Keychron K7. I recommend using one if you’re thinking of using the Keychron K7 long-term; Keychron makes a low-profile wood wrist rest if you don’t want to look around.

I mostly don’t care if a keyboard is wireless or not. I work from home, and when I do work somewhere else, I have a Chromebook and an iPad with a keyboard case. At home, I keep my wireless keyboards wired because I don’t have to plug it in when it’s out of juice. You will get some lag when gaming with wireless turned on, but I’m not a super competitive player so any drop in performance is lost on me. However, if a keyboard is going to be wireless, I expect more than a day or two of use before needing a recharge. Keychron claims the K7 has 34 hours of battery life in Bluetooth mode with either the white or RGB backlight turned on. I couldn’t back up these battery ratings.

Several times I logged off with the keyboard still juiced up only to find it dead the next morning. The Keychron K7 has a sleep mode that activates after 10 minutes, but the only explanation I can think of for why mine died overnight is that it never went into sleep mode and was trying to pair all night. The battery also died on me mid-sentence once, which only highlighted the Keychron K7’s lack of a reliable and useful battery life indicator. There is one, but it’s small and faces away from you so you have to turn the keyboard around every time you want to check the battery. It’s bad design. The Keychron K2 has the battery indicator above the arrow keys, and it’s much more noticeable when it blinks red. I know the K7 is smaller, but, surely, the battery LED can be moved to face the user in a future revision.

When you make something so thin, you have to make cuts somewhere, and the battery got hit the hardest. The Keychron K7 has a small 1,550 mAh battery compared to the Keychron K2’s beefy 4,000 mAh battery. I can’t remember a time when I had battery issues with the Keychron K2 when used in wireless mode. To not deal with battery life, I just ultimately left it plugged in all the time. Using the Keychron K7 wired doesn’t bother me much, but if you’re working away from your home or office, make sure to bring a battery bank with you. You can turn off the RGB to get more out of the battery, but it’s supposed to give you 34 hours with RGB activated. To be fair, I reviewed a pre-production unit, so it’s possible that battery life will be better on the final product. Keychron might be able to push out a firmware update to improve battery life, but considering the size of the battery on the Keychron K7 versus the Keychron K2, I wouldn’t expect any major jumps.

Other than the mediocre battery life for wireless mode and my personal dislike for the Mint switches, I enjoyed my time with the Keychron K7 (especially with the Banana switches). The low-profile design takes some getting used to (definitely get a wrist rest of some kind if you can), but overall it’s an affordable, well-built, and compact mechanical keyboard.

With red switches, the Keychron K7 could be a gaming-dedicated keyboard, but tactile switches also makes it a good choice for typing. Or you can get both and swap out the switches when you get bored if you have the hot-swappable version. The Keychron K7 is pretty versatile like that. If you’re looking for a low-profile, wireless, 65 percent mechanical keyboard that’s hot-swappable, the Keychron K7 is the only one I’ve seen that checks all those boxes. The Keychron K7 won’t wow anyone, but if you’re coming from Apple’s Magic Keyboard, thin non-mechanical keyboards, or even laptop keyboards, it’s a great step up.