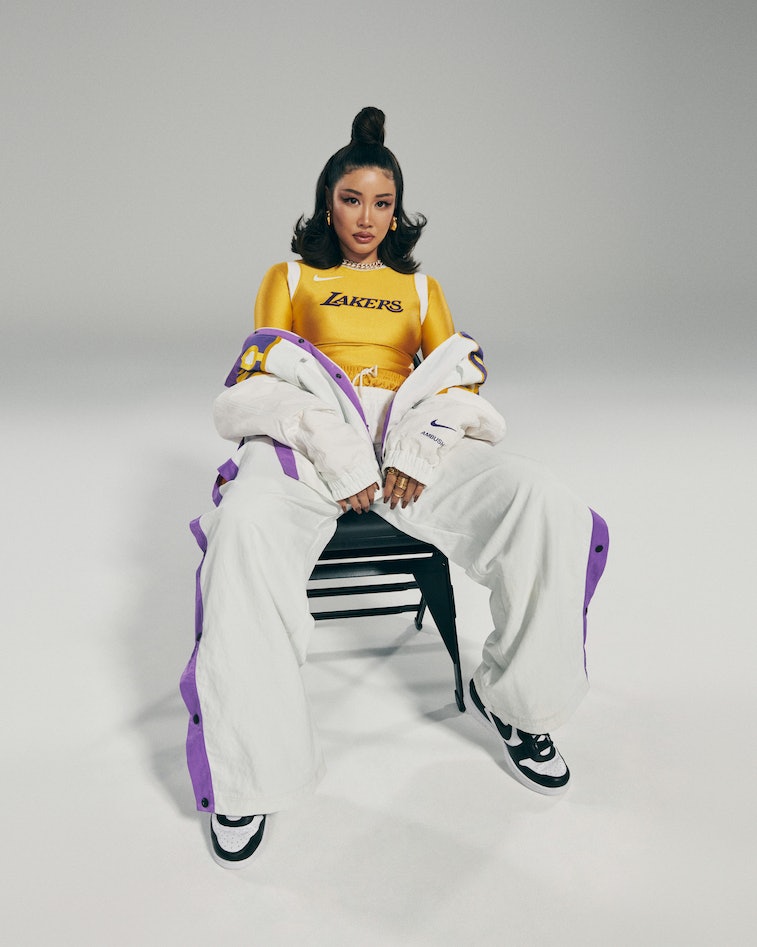 The devil works hard, but Yoon Ahn works harder. Following collabs with Converse and Beats, and Nike, the Ambush founder has now teamed up with the NBA, making her the first female designer to do so. The new collection, created in partnership with Nike, centers around the colors and logos of the Los Angeles Lakers and Brooklyn Nets — though the teams come from different sides of the country, both are influential in basketball and street style culture. We have high hoops for this capsule.

Nike announced that the upcoming Ambush Nike Dunk High would actually serve as part of this larger collection with the NBA. The unisex sneaker, which was first revealed in February, boasts a black and white color scheme, though it’s rumored Nike and Ambush have other shades in store. Let’s hope for one in the Lakers’ colors.

No sideline style — Like past designs, Ambush took something classic and completely revamped it through Yoon’s multidimensional point of view. On the inspiration for the collection, she said, “I thought of all these amazing and strong female characters from the ’90s who would come out in men’s clothes, and I wanted to see how we could carry that attitude, but bring in more feminine forms.”

With that in mind, the staple of the collaboration is an iconic piece that’s long been a part of both basketball and street style culture. The tearaway basketball warm-up pant has been transformed into a seasonally-appropriate, insulated trouser complete with a playful, contrast-color double waistband. Its design aims to replicate the look of game shorts peeking out from under pre-game warm up suits. Two pairs are available, with one in a white and lavender colorway and the other a classic black and white.

Alongside signature Ambush detailing, Yoon also wanted to provide fresh styling to female basketball fans. “The project began with a conversation about making women feel proud to represent their favorite teams,” she said. “We were considering how to balance the culture of the sport without losing style.” Even if you’re not a Lakers or Nets fan, you have to admit this collection is definitely fire.

Rounding out the collection is the Ambush approach to the Nike Dunk. To channel movement within the shoe’s design, Yoon used Japanese bike, car and truck culture as inspiration. The modified Dunk boasts an elongated and heightened form, with Swooshes extending beyond the heel to imitate tailpipes. Of course, its black and white colorway makes the shoe easy to style with any of the pieces from this collection.

Tip-off — The Nike and Ambush NBA capsule drops globally December 11 on Nike’s website. Prices have yet to be announced for the triple collaboration, though if you’re looking to score something on the cheaper side, a branded basketball is your best bet. In the meantime, I’ll be scheming how to get my hands on those Dunks. Can I call a time-out for a second?