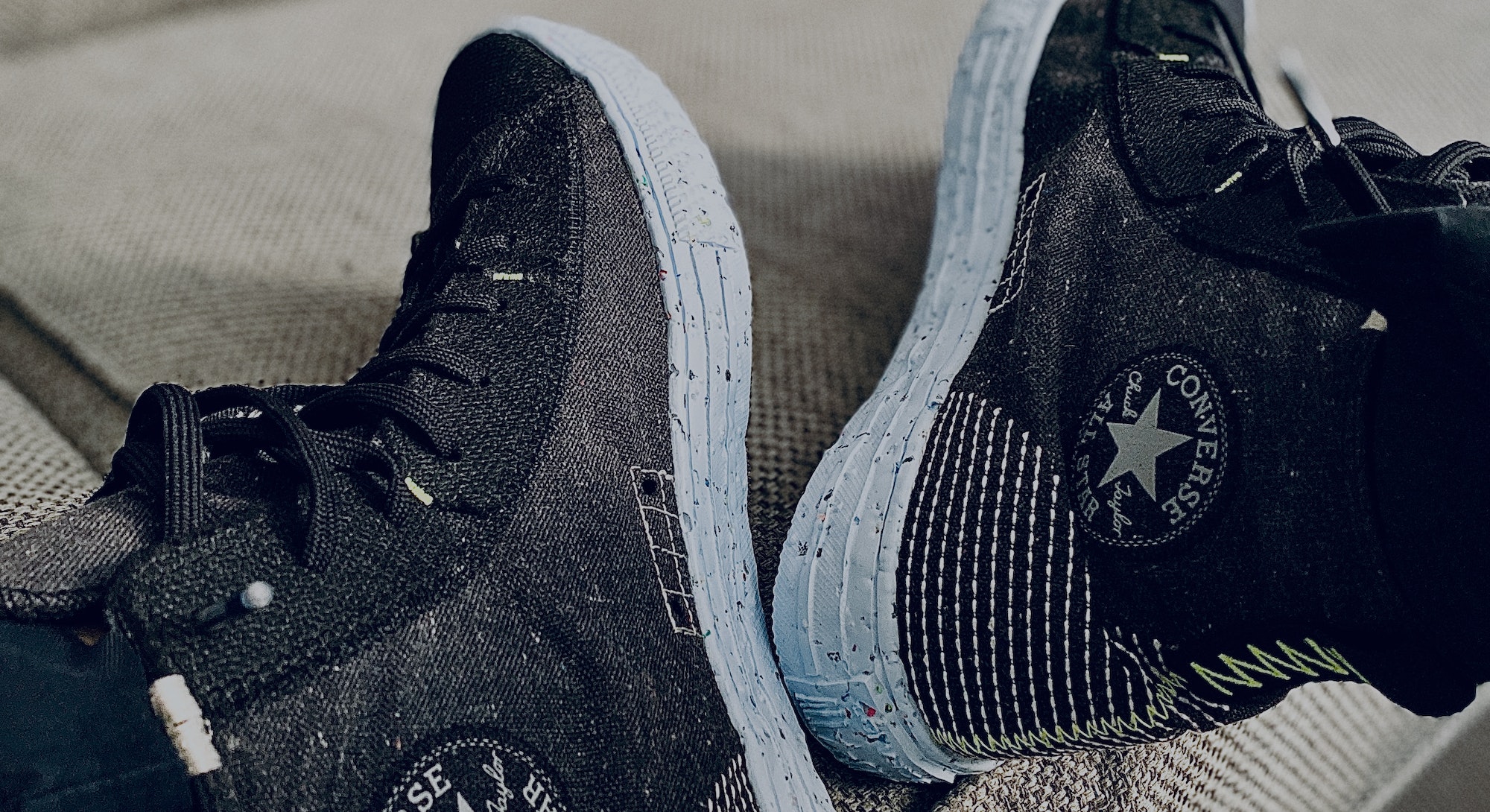 2020 has been a year of rejuvenation for the All-Star Chuck Taylor.

First, back in March, Converse did a complete overhaul of its iconic silhouette with the CX line, which features all-new materials and a revamped rubber outsole design that gives it a slightly chunky look. And now comes the "Crater" Chuck Taylor, a sneaker that uses the same foam midsole as the "Space Hippies," Nike's recently launched sustainable collection. The Crater Chucks are made with at least 40 percent recycled materials, according to Converse, including recycled polyester and recycled textile waste scraps.

The sustainable materials used give these Chuck Taylors a fresh look, thanks to that Crater Foam midsole and the added stitching accents around the heel, ankle, and lacing areas — all while keeping the essence of the 100-year-old shoe. They're comfortable, too: As soon as I unboxed them, I noticed how lightweight they are and the canvas-like recycled upper makes it easy to get the sneakers on and off. Think of it as wearing a high-top slipper, meaning you wouldn't have trouble walking around in these all day long.

Aside from certain distinguishing details, namely the speckled foam spin on a classic sole, the Craters are Chuck Taylors through and through. Converse says one of the keys was to ensure that, even though it is a reimagined version of the shoe, its look and feel remained true to the original. That's why it was important to focus on getting certain features just right, including how tall it is and the renowned Converse All-Star patches on the upper. And it's a Chuck Taylor alright — the only difference, essentially, is that this one is made out of trash that Nike is transforming into new materials.

As with the Space Hippie capsule, and now some Jordans and VaporMaxes, the Crater Chucks are part of Nike's "Move to Zero" initiative, the company's plan to work "toward a zero carbon and zero waste" future. And although Converse does have the "Renew" Chuck Taylors, which are made from recycled polyester, recycled cotton canvas, and virgin cotton, the brand says its Craters are one of its most sustainable sneakers to date.

Only time will tell whether these sustainability efforts from companies like Nike and Adidas are enough to make a positive impact on the environment, but there at least seems to be genuine interest in the cause. At the same time, Nike is a business and figuring out how to create new products out of junk materials will benefit its bottom line along the way, too.

Ultimately, what makes sneakers like the Space Hippies work isn't only that they're sustainable, but also that they offer consumers a novel, unique alternative — and the Crater Chuck Taylors are no exception. Altogether, these new shoes sport a 100 percent recycled webbing and mesh line, 85 percent recycled eye-stay and toecap, 20 percent recycled cushioned OrthoLite sock-liner (part of what makes them so comfy). Then there's the Crater Foam, which features roughly 12 percent Nike Grind rubber, the same recycled footwear and excess manufacturing scraps that the company uses on other shoes and even to build football stadiums.

If you're into the black-and-blue Crater Chucks pictured here, it looks as if Converse has already sold out on its site. A spokesperson for the brand told Input that these (as well as the other two original Crater colors) likely won't be restocking, but that this is an ongoing project. Nike, for instance, has already dropped new hues of its Space Hippies, and more are on the way.

That said, those of you who want to own this particular pair can buy it from resale apps such as GOAT for $240 and up, depending on the size. That's a significant price hike from the $95 that the Chuck Taylor Craters retailed at — but, as sneakerheads and hypebeasts know all too well, the best kind of swag doesn't come easy (nor cheap).