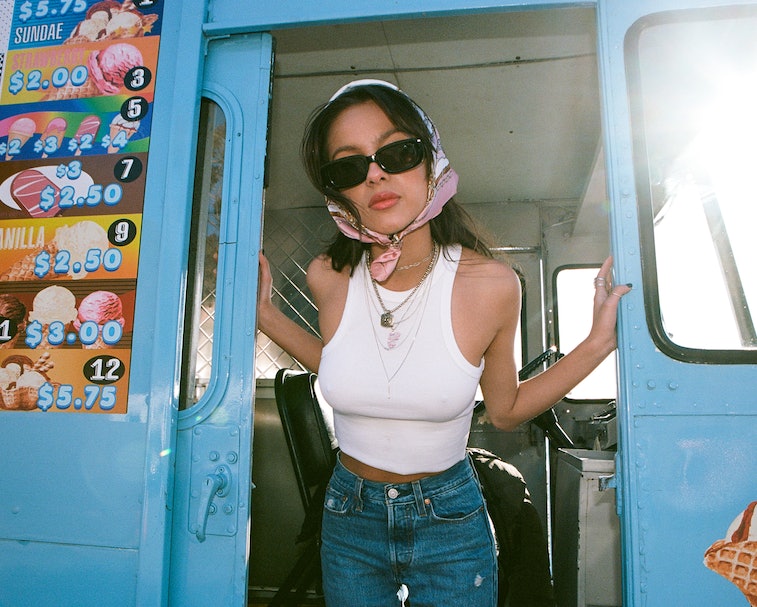 We’ve already admitted we’re envious of Olivia Rodrigo’s style — but now, we actually have a chance to wear some of her pieces, thanks to the pop star’s new Depop shop. Riding the high of Rodrigo’s debut album SOUR, the aptly-named “SOURshop” will feature looks from her music videos — “good 4 u” and “deja vu,” in particular — as well as her own personal closet.

Understandably, the Depop store already boasts 41,000 followers eager to shop Rodrigo’s items. Nothing has been listed for sale yet, though some themed posts tease of what’s to come: “Shop SOUR-themed outfits worn by me in the videos for deja vu and good 4 u 🍓 🔥,” the account’s first preview post reads.

Affordable and iconic looks — With Rodrigo teasing her Depop shop on Instagram, a drop is imminent. Pieces expected to be up for sale include retro black-framed sunglasses, gothcore creeper platforms, a pink boa, the pink silk headscarf that Rodrigo wore in her “deja vu” music video, and more. Rodrigo’s Depop bio states that all proceeds will be donated to charity, though details about the organizations or causes have yet to be announced.

Whether you’re a teen fan or a millennial that relates a little too much to “good 4 u,” Rodrigo has made sure her Depop prices are relatable and accessible to all. Prices start at $15 for some flower hair clips and max out at $85 for a pair of distressed Levi’s, both seen in the “deja vu” music video.

Gen Z <3 Depop — Celebrities selling items directly to fans on resale apps like Depop may seem odd, but the move is very on-brand for someone like Rodrigo, who belongs to a generation of shoppers looking for sustainable, unique style options.

Depop has only been around for ten years now, but in that time it’s managed to build a huge community around fashion resale — the app is essentially one big thrift store — and be valued at $1.63 billion in an acquisition by Etsy. Josh Silverman, CEO of Etsy, even called Depop the “resale home for Gen Z consumers,” pointing out that 90 percent of the Depop community is under the age of 26.

According to that data, most of Rodrigo’s fans, or at least people her age, are already active on the app. So if you’re hoping to score any of the pop star’s hand-me-downs, know you’re up against 40,000 other shoppers — or double that, once Rodrigo actually begins to put items up for sale.