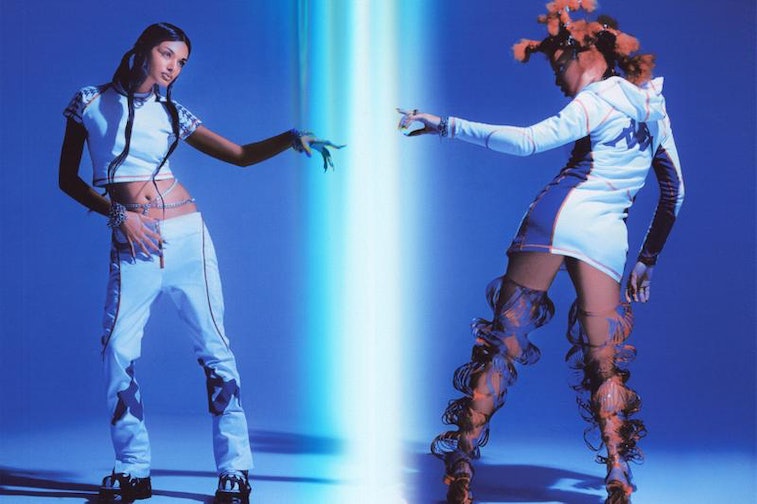 As 2020 comes to a close, we’re all desperate for a look into the future. And with its newest team-up with Sita Abellan, streetwear brand Kappa is happy to take us there. The collaborative capsule is based on the nostalgia of video games and ‘90s femme fatales.

Perhaps tuning more into the theme of escape within video games, Kappa is the latest brand to delve into the digital world. Balenciaga recently released its own video game to promote its new collection, while Travis Scott dropped a Playstation-themed sneaker. Mixing in the nostalgia, Microsoft is encouraging young coders to create their own video game for the reboot of Space Jam. With the year we’ve had, everyone’s looking for an exit, preferably a customizable one.

The future is female — Sita Abellan fits into this collaboration perfectly. The Spanish model and DJ is notorious for her ‘90s club and Harajuku fashion sense, as well as her breakout role as henchwoman in Rihanna’s “Bitch Better Have My Money.” While she’s usually styling J. Balvin, this capsule focuses on badass women.

“When I began the project I had a vision of strong empowered females encompassing the idea of heroines or fighting characters within a video game,” Abellan said of the collaboration. “I wanted to put this aspect into the shoot projecting a surreal vibe with an emphasis on the models’ features heightened through large expressive eyes bringing the characters to life.”

Highlighting the capsule is a blue bodysuit, contrasted with pink overlock stitches throughout. A snake graphic, as well as Kappa’s signature logo, is printed on the hip and back of the garment. For the minimalist, a white T-shirt and jogger set branded with Kappa’s navy logo is available, complete with red contrast stitching. An exposed red zipper can also be seen on the pants.

Comprised of five pieces in total, the collection wraps up with a hooded mini dress, similar to the design of the matching set. Featuring a double zipper, red contrast stitching, and navy snake graphics, the dress looks as futuristic as it does comfy. Details like a Kappa logo zipper and a navy Kappa logo print let everyone know who you’re repping.

Cop the Kappa — While the clubs won’t be open for what may be years, this collection has me ready to party on the moon. In the meantime, the capsule’s simple colorway makes it versatile for whatever next year’s situation is, which is hopefully a little lighter than this year’s.

The Sita Abellan x Kappa collaboration will drop on Kappa’s website soon, but for now, you’ll have to make do with the futuristic campaign. Unless you know how to time travel, in which case, why are you still here?