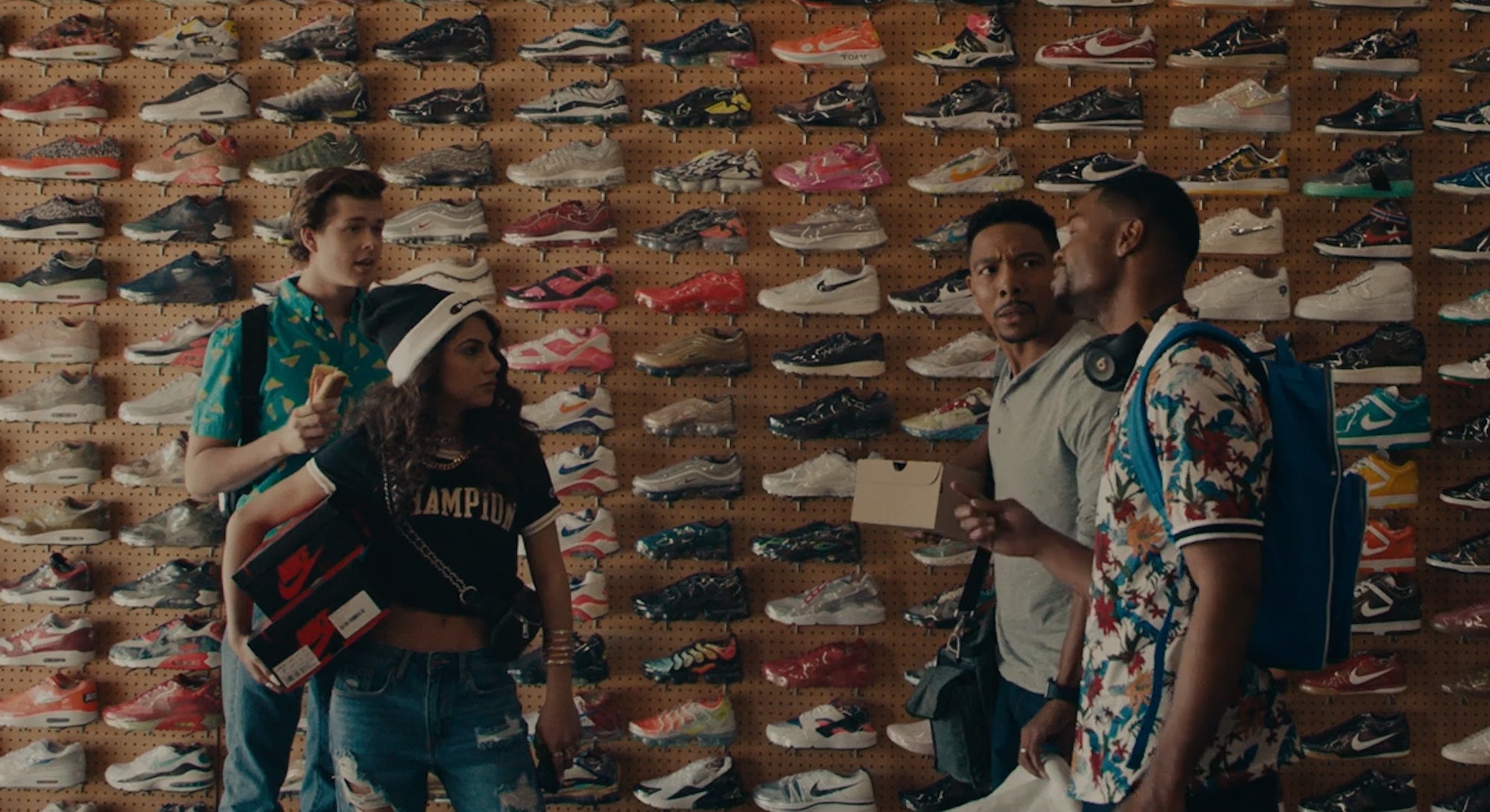 When he was a teenager in the late '80s, Jay Longino says he was lucky enough to get a job with the NBA's Atlanta Hawks, which would eventually give him the opportunity to meet one of the greatest athletes of our generation: Michael Jordan.

Jordan, who was playing for the Chicago Bulls at the time, had built a reputation around the league for giving away his game-worn shoes to kids at different arenas — and Longino turned out to be one of those after he took a chance and asked "Mike" for them. Decades later, Longino tells Input that gift from Jordan — a pair of his signature Nike Air Jordan 4s — was what planted the seed for the creation of Sneakerheads, a new Netflix show that follows the journey of a stay-at-home dad who used to be a sneaker collector and suddenly decides to get back into the game of hunting for shoes.

In the now-streaming series, the main character Devin (played by Allen Maldonado) spends much of his time desperately trying to buy a pair of highly coveted "White Cement" Jordan 4s, the same silhouette creator and showrunner Longino got from Jordan himself in real life. But, after a string of mishaps that include losing thousands of dollars on failed get-rich-quick schemes, Devin ends up on a quest for a mystical (and fictional) pair of Air Jordans dubbed the "Zeroes," which he and his friend Bobby (Andrew Bachelor) believe are the holy grail of sneakers.

“The experience in the culture is different for everybody.”

Longino says that much of the premise of Sneakerheads is based on his personal experiences and those from his writers and producers, as he tells the story of how his mom ended up accidentally selling his prized footwear memorabilia from Jordan in a garage sale while he away at college. He said losing that elusive pair, in a way, is the metaphor for Devin's adventure to get back the White Cement AJ4s he was once deeply attached to and everything that came with them — from rekindling old relationships and managing current ones (like with his wife), to building new friendships.

Since the first season of Sneakerheads only consists of six episodes, each about 30 minutes long, we won't ruin it for you with spoilers of how Devin's story unfolds. But what we can tell you is that the show, naturally, tries to capture key aspects of sneaker and streetwear culture. One of the opening scenes, for example, takes place outside a sneaker shop in Los Angeles where dozens of people are waiting in line to buy a pair of the limited-edition White Cement Air Jordan 4s. At another point, Devin and Bobby end up making the trek from the U.S. to "Sneakers Street" in Hong Kong, which is considered a mecca of shopping for streetwear enthusiasts.

"We wanted to do [the show] as authentically as possible," Longino said in an interview. "And I think the experience in the culture is different for everybody. We tried to be cognizant of it as much as we could, but we were also aware that it's changed a lot and it changes so fast." He added that, while sneaker culture is more complex than simply the act of buying pairs, he didn't want to "get into like the box of it all" in Sneakerheads — at least not in its debut season. "We wanted to make it more about this journey and friendship of these two guys and their sort of rag-tag group of friends and still be authentic," Longino said. "I didn't want it to be about kids buying bots."

“I didn't want it to be about kids buying bots.”

Bots, aka automated computer scripts that can pay for items online faster than most humans can, have become a preferred tool for resellers and savvy shoppers — and they're a major reason why buying hyped shoes has become virtually impossible for most people. "That wasn't the story I wanted [to tell]," said Longino. At the same time, though, Sneakerheads does capture various elements of the sneaker space that have taken off in recent years, such as the rise of apps like GOAT (characters in the show use it to check the resale price of sneakers) and even the importance of shoe-cleaning services like Jason Markk.

"Hopefully we did as good a job as we could capturing the spirit of it all," Longino said, "and that people actually see that and are happy with it." Throughout the series, Longino said he also wanted to ensure that sneakerheads watching would see familiar faces, which meant "calling in favors" to get celebrity cameos that would add a little bit of flavor to the story. Again, for the sake of not spoiling Sneakerheads for you, we won't tell you who all shows up in the episodes, but one of them is comedian, writer, and TV host Hasan Minhaj and a renowned sneaker customizer Dominic Ciambrone, also known as "The Shoe Surgeon."

"The show, at the end of the day, is about bringing themes that everybody can relate to," said Longino when asked about who's the ideal audience for the show, noting that it's not just for actual sneakerheads. "It's about friendship, and about loyalty, and about [having] passion for something. And I don't think it matters what that passion is for. People enjoy watching people who are passionate and are chasing a goal." Most importantly, he added that he "wants to make people laugh," especially at a time when positive energy is needed in the world.

“It sounds so weird to say about sneakers, but [they] bring people together.”

Now, don't expect Sneakerheads to be a full-on comedy special — and there are definitely parts of the story that can feel super cheesy — but the show does a solid job of being so lighthearted and entertaining that you don't have to know everything there is to know about sneakers to enjoy it. "The world is metaphorically and literally on fire right now." Longino said. "And with all the racial inequality, racial injustice, and the pandemic, I just think if we can put a smile on people's faces and also shine a light on a culture that we're passionate about, then we did our job and hopefully people appreciate that."

Still, Longino knows how protective sneakerheads can be over their culture, and he's prepared to receive all kinds of feedback that may come his way — good or bad. "There's always going to be some people that are like, 'Why did you do this to the culture?'" said Longino. "But I'm incredibly proud of it. I love shoes. I love the conversation they bring to me. It sounds so weird to say about sneakers, but [they] bring people together, so why not wanna share that?'"