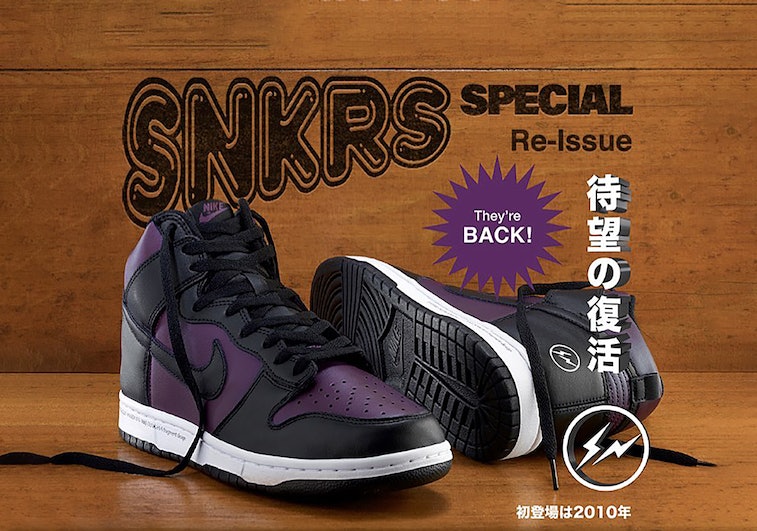 After teasing a black and white picture of an upcoming Fragment Design Dunk High collab, designer Hiroshi Fujiwara confirmed he and Nike would be bringing back the iconic “City” pack from 2010. As seen on Fujiwara’s Instagram, the two have revamped the Dunk High design to make it suitable for 2021 — and the first sneaker to drop from the pack will be the “Beijing” iteration.

Still sporting the same dark purple and black tones as the original, the new Dunk High isn’t mismatched, instead opting for a cohesive look. Along the toe boxes, quarters, and collars, the high top sneakers boast a regal “Wine” shading, which is accompanied by black overlays and Swooshes. As a nod to the 2010 pair, Fragment Design’s signature bolt emblem is debossed into the lateral heels in white, while more branding is printed onto the white midsoles in black.

Here come the hypebeasts — Fujiwara’s reworked design will surely appeal to the new generation of sneaker hypebeasts: Between the Dunk High’s sole branding drawing comparison to Virgil Abloh’s signature Off-White markings (but in a less obnoxious manner), to Travis Scott avidly supporting both the Dunk silhouette and Fragment Design, consumers will do anything — or pay any price — to score the silhouette.

Of course, certain hypebeasts will be looking towards the “Beijing” drop as an investment to resell — perhaps for funds towards Scott’s own Fragment Design sneaker set to release later this year. Made on a similar silhouette, Nike’s Air Jordan 1, the collaborative shoe takes on the classic blue shade, resembling the Fragment Design x Air Jordan 1 from 2014. A white base keeps the sneaker clean, while black graces the backward Swoosh that has become synonymous with Scott.

Take a trip to SNKRS — An exact date hasn’t been announced for Scott’s collaborative Air Jordan 1, but Fragment Design’s “Beijing” Dunk High is expected on June 5 through Nike’s SNKRS. The purple and black design will be $150, and it’ll be available via draw — AKA you’ll need all the luck you can get to win that lottery.

If SNKRS screws you — which happens more often than not — don’t lose faith. Although nothing’s been confirmed yet, it’s likely that Fujiwara’s “Beijing” design will be joined by the “London” and “New York” iterations from Fragment Design’s original “City” pack. Let’s hope so.