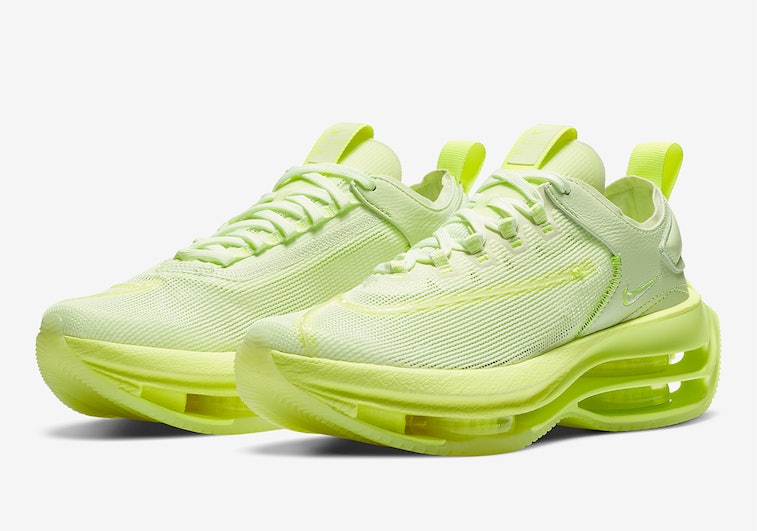 Nike continues to get weird without the help of its collaborators with the new Zoom Double Stacked. As the name suggests, this beefy sneaker comes with not one, but two exposed Zoom Air units stacked on top of each other to make up the heel. The result ends up being similar to Nike's collaborative Sacai LDV waffle — but with the benefit of (likely) being much easier to secure.

What else is going on? — The Zoom Stacked will debut fully adorned in "Barely Volt," Nike's proprietary name for neon yellow. Every detail is rendered in the bright color, including a minimalist Swoosh outline that wraps around the upper and a pair of nylon loops on the heel. While it's the stacked Zoom units that are ostensibly the highlight, the protruding heel unit that houses them may just be the most fetching design flourish.

Viewed from the side, the heel extends well beyond what would be considered normal and is similar to Nike's record-breaking Air Zoom Alphafly Next%. Increased surface area found through a protruding heel is starting to become more common in running shoes, as it reduces impact and smooths the transition from heel to toe. But because the Zoom Double Stacked is more of a lifestyle sneaker, its heel has more room for aesthetics. Its carved lines are best appreciated from the rear, where they can be seen in full and with the wider toe in the background forming a picture that looks downright gothic.

Nike's getting more daring in-house — With designers coming in to collaborate with Nike and treating their sneakers as less than precious over the past few years, the brand is starting to get more daring on its own. Much of its weirder designs have come under the N. 354 line, which deconstructs existing silhouettes including the Air Force 1, Huarache, and other classics. With the Zoom Double Stacked, Nike is signaling that its bolder efforts won't be contained to a single umbrella.

Dropping next month — The Zoom Double Stacked is slated to release July 2 through Nike's website for $230. While that's a collaboration level price tag, it should be easier to purchase than anything with a designer label's name attached. And even if this first Barely Volt variant does fly quickly, expect more versions to follow over the course of the year.