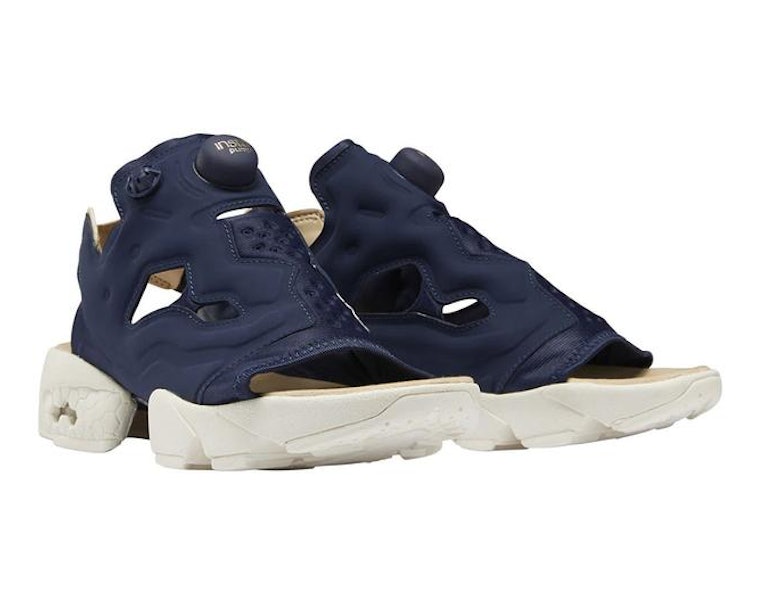 When spring turns to summer, chunky sneakers are usually replaced with more breathable sandals — but this year, Reebok isn’t limiting its beefy silhouettes to cooler weather. Much to our surprise, the brand has launched a sandal version of its Instapump Fury, making Reebok the only company to sell a slide that can be filled with air. And while the shoe’s hunky construction is near monstrous, we might be able to look past it if the sandal actually provides some heat relief.

Reebok’s — for lack of a better word — “unique” design joins a range of chunky sandals dropping ahead of summer. It seems that while sneakers are slimming down, slides are bulking up. Notoriously beefy shoe brand Dr. Martens unveiled a collaboration with Japanese slide specialist Suicoke, resulting in two leather sandals fit for goths and trend-lovers alike. Of course, Kanye had to take the oddities to another level with his Adidas Yeezy line and debuted two new shades of his chunky, perforated Yeezy Foam Runner. Not to be outdone, Reebok sees a combination of Dr. Martens’ stability and shape, while also providing the same breathability as the Yeezy Foam Runner. But can the latter two be pumped full with air? We didn’t think so.

Wear more air — Ever since Adidas confirmed its plans to divest from Reebok, the underdog brand has actually pumped out (no pun intended) some of its most innovative designs. While the Instapump Fury sneaker dates back to 1994, Reebok has transformed the silhouette into something it could sell today — emphasis on could. The chunky shoe now sees itself in an equally thick slip-on sandal, featuring an open toe and heel.

Arriving in two shades with names as unusual as the shoe, “Vector Navy/Chork” and “Chork/Sand Stone/Gold Metallic,” the summer-ready shoe is constructed of a mesh and nylon upper with geometric cut-outs at its sides. The Instapump’s iconic “Pump” button remains the highlight of the sandal, while a thick, split midsole further pays homage to the original design. A hexagonal, honeycomb-like print, also a part of the shoe’s heritage, graces the rubber midsole heel.

As the sandal has obviously been crafted by Reebok, the label has kept branding to a minimum. Pump button aside, Reebok motifs don’t appear anywhere on the shoe besides the tan strap found at the heel. Gold Instapump Fury branding is also hidden away, only appearing on the slide’s insole. But considering the sandal’s elaborate silhouette, more branding would have made the shoe far too busy. Instead, we’ll enjoy the simplicity of our air-filled, chunky platform sandals.

Covet the chunk — You’ve got to really want this slide to buy it, though. As of now, the beefy silhouette is only available through international retailers like atmos, where the shoe is retailing for ¥16,000 (approximately $148). Given the sandal’s unique design, however, we might see a stateside release as summer draws closer and shoes become less breathable. We’re eager to see if the Pump button can act as a manual air conditioning unit.