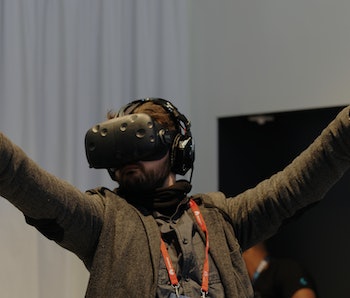 HTC is launching an updated version of its Vive Tracker this week, and it is impressively small. The third generation of the Vive Tracker is 33 percent smaller than its direct predecessor and 15 percent lighter — and, by some miracle, it has 75 percent longer battery life.

For those unfamiliar with the Tracker, it’s a motion-tracking accessory that connects to the rest of HTC’s Vive VR ecosystem. It’s basically a little triangle-shaped device you strap to various parts of your body to track it through space.

The third-generation Vive is a huge step forward for HTC’s VR system. Strapping bulky pieces of hardware all over your body while dancing around the living room isn’t exactly enticing to many would-be consumers. That slimmer form factor is going to make it much easier to market the device to VR fans — especially with the added benefit of longer battery life.

HTC is leading the pack — While most companies are investing heavily in standard VR headsets, HTC is innovating on an entirely different level.

The strappable Trackers are only the beginning: there’s also a Deluxe Audio Strap, dedicated Vive Controllers, Valve Index Controllers, Wireless Adapters… the list goes on. It’s a full-fledged virtual reality system, rather than a single-investment headset.

HTC is also introducing a Vive Facial Tracker today, which the company says is capable of tracking 38 facial movements across the lips, jaw, teeth, tongue, chin, and cheeks. The Facial Tracker basically lets you project your face’s most minute motions onto a VR avatar in real-time by using an infrared illuminator connected to two cameras.

But there’s lots of competition — HTC’s virtual reality ecosystem is extensive, but it can quickly grow expensive for the average gamer. Even the company’s most basic headsets are bulkier and pricier than competitors’ options. Facebook’s Oculus 2, in particular, has really set a new bar for standalone VR device value. And that competition is only set to increase in the near future. PlayStation’s next-gen VR system is on its way, and other big tech companies like Apple are working on standalone VR headsets of their own.

HTC has also faced issues with developer adoption rates. Valve, which frequently collaborates on both hardware and software with HTC, recently called out developers for not taking the time to learn about and implement its specialized controller systems.

Still, HTC has cornered a very niche part of the virtual reality market: those who are ready to go all-in on the technology. No one’s doing it quite like HTC.