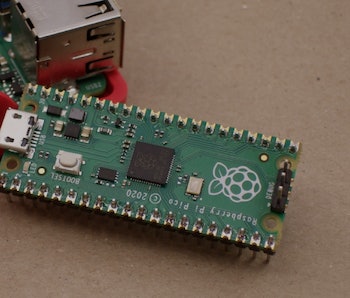 Raspberry Pi is that rare sort of tech company that strives to create inexpensive, accessible products. The company’s latest project is perhaps its most impressive yet: a microcontroller board that costs just $4. The Raspberry Pi Pico is tiny and ridiculously affordable. What else could you ask for in a microcontroller?

Raspberry Pi’s Pico board is built around the RP2040, a minuscule processor developed by the company itself. The RP2040 is a dual-core Arm Cortex-M0+ processor with 264KB of internal RAM and support for up to 16 MB of off-chip Flash, according to the company’s website.

Like many of Raspberry Pi’s products, the Pico isn’t going to get you very far on its own. You’ll need to dedicate some cash to peripherals and external sensors and such to really use the Pico’s power. And, of course, beginners will need to study up on basic programming and hardware connectivity. But Pi accessories are cheap and forums dedicated to getting new users up to speed abound.

Double power, hold the cash — Raspberry Pi has built a small empire on the idea that tech hardware should be made more widely available, as should the skills to harness it. The Pico adds a unique new product to Raspberry Pi’s lineup with that same mentality: easy to learn on and even easier to purchase.

The Pico is a microcontroller — similar to a system-on-chip (SoC) but with a little less sophistication. You’d find an SoC in something like a tablet or a smartphone, whereas a microcontroller is more likely to be found in appliances, toys, or car engine systems.

At just $4, you can use Raspberry Pi’s microcontroller to control a light display or control small appliances or, well, just about anything else you can imagine. Setting the board up is as easy as downloading an SDK from GitHub and installing a few tools; it’s even simpler for those who already work with Raspberry Pi computers, as the company has created an automated script compatible between its existing devices and the Pico.

Breaking in won’t be easy — The Pico is a stellar addition to Raspberry Pi’s already-impressive lineup of hardware products. It’s a low-cost way to learn about microcontroller programming, but it’s powerful enough to be interesting for experts, too.

If there’s any downside to Raspberry Pi’s latest choice of product, it’s that the microcontroller market is a very saturated one. As Hackaday points out, microcontrollers aren’t exactly expensive in 2021, either. Raspberry Pi has long cornered markets where similar products are much more expensive or complex. The company might find it difficult to break into this particular market, but it's brand name recognition helps.

Still, the Pico is an impressive addition to Raspberry Pi’s arsenal and one that’s sure to please both long-time fans of the brand and those who just want to learn what a microcontroller is even used for.