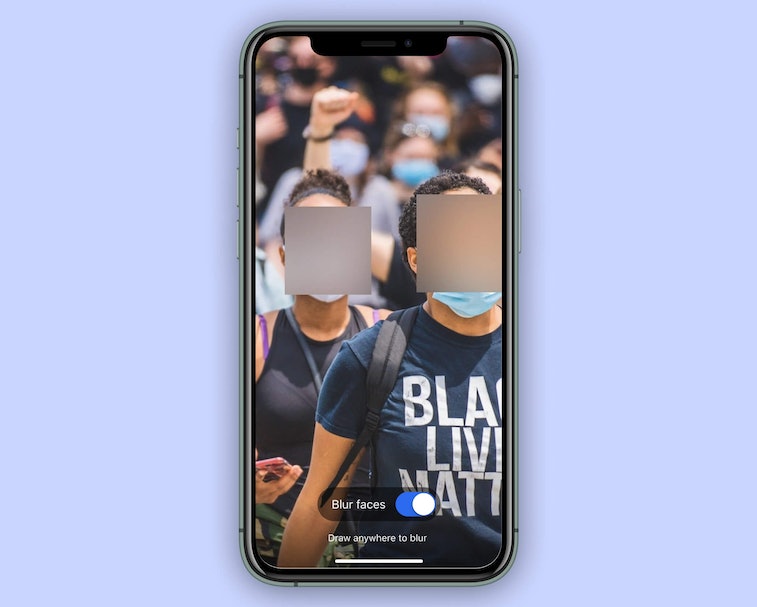 Calls for anonymity have been spreading while Black Lives Matter protests go on around the world — a response to six Ferguson protesters dying under suspicious circumstances after the demonstrations there. With cities implementing curfews and reports of police violence escalating, it's essential to try and avoid spreading videos or images of protesters' faces, whether that's by careful framing or blurring. Going the latter route will now be a little easier, as secure messaging service Signal has introduced a new tool to help keep the subjects of photos anonymous.

The latest version of Signal for iOS and Android contains a blur feature within the image editor. While it can automatically detect faces to blur, users can also use a brush to do it manually. This is useful for any lapses in the system library, as well as hiding any other identifying features beyond faces. It also means Signal is worth downloading even if you don't want to use it as a communication tool. There's nothing stopping you sharing images altered with it to other services.

An ideal time for encrypted messaging — Signal said in a blog post announcing the new feature that it's seen an increase in traffic for its encrypted messaging app. As police continue to crack down on protesters, Donald Trump threatens to categorize Antifa as terrorists, and the DEA has been authorized to surveil demonstrators, it's important to protect your privacy if you're participating in the protests in any way, and to protect the privacy of the people protesting alongside you.

The Trump administration has sought the help of tech companies to bypass their own encryption but has, fortunately, been largely met with resistance. Proposed "Earn It" legislation would also place increased responsibility on tech companies for user behavior, and Signal has said it'll pull out of the United States if the bill passes.

Signal is also developing masks — As face mask usage has become widespread per CDC recommendations for combatting COVID-19, Signal says it's working to find a manufacturer to make large quantities of face coverings. If successful, the company would provide masks for free to its users — proving helpful for both increasing anonymity and fighting the spread of the coronavirus at the same time.

Before that happens, Signal says it's pushing to roll out the blur feature as soon as possible. If you're planning to communicate with protesters in the coming weeks, you should seriously consider installing it.