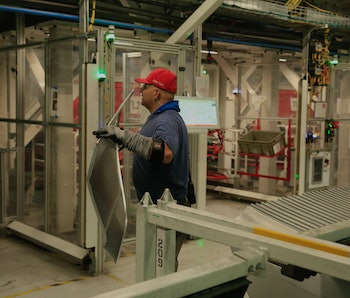 After initially refusing to close factories and doubting the seriousness of COVID-19, Tesla is making a complete 180-degree reversal. Electrek reports that the electric car company will hold a monthly lottery to encourage workers to get vaccinated.

Any employee who is vaccinated is eligible to win, with the top prize being $10,000 in cash. Other prizes will be up for grabs, including $5,000 in cash and a vacation. Workers will need to upload their verified vaccine card to an online system to participate. The contests will run from now through the end of the year.

Mandates — It’d be easier to do a simple mandate, which Tesla is legally within its right to do. It would probably be good too, considering hundreds of millions have been vaccinated without issue, and hospitals are being clogged with preventable cases. But other companies have chosen a softer approach as well, including Amazon, which is raffling off cars and a top prize of $500,000.

Injuries at both companies are higher than average, with the work often grueling, so if the chance at winning $10,000 in cash is not enough to encourage vaccination, maybe nothing is.

For Tesla, getting workers vaccinated is important to ensuring its factories don’t face any further shutdowns going forward, as they did earlier in the pandemic.

Vaccine skepticism — Ironically, with him being such an influential person in the field of hard sciences, Tesla’s leader contributed to vaccine skepticism. Musk has previously said he wouldn’t take the vaccine, in September 2020, but later shifted his stance. He also promised to supply necessary ventilators to hospitals during the deepest throws of the pandemic, but it later came out that Tesla had ordered the wrong equipment.

It’s not clear if Musk himself has been vaccinated, but he did reportedly recover from a positive COVID diagnosis.