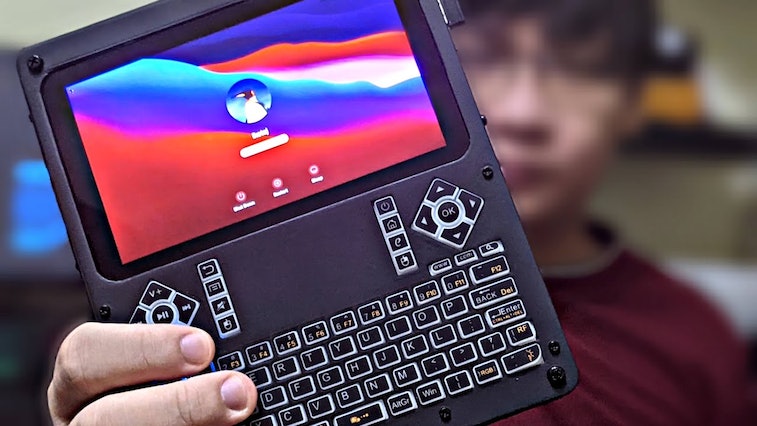 Every day, a new hacked-together product sprouts from the ether, and we love to see it. This time, an ingenious YouTuber (via Hackaday) has seemingly done the impossible: make a Hackintosh handheld running the full version of macOS Big Sur. The DIY device may be the first of its kind, according to Hackaday. Even if it’s not, it’s awesome and we want it.

If the Mac mini isn’t “mini” enough for you, YouTuber iketsj’s handheld Mac surely is. The one-of-a-kind portable Mac is entirely self-contained with a screen, keyboard, and battery. Sadly, there’s only one of these custom Macs in existence and it costs more to make than it does to buy an M1 Mac mini. But as iketsj says at the end of the video: “Where’s the fun in that?”

The video is thorough enough for anyone interested in attempting a similar build, though there is no link to a parts list or a written guide. If you’re thinking of making one, you’re probably savvy enough to figure out where to buy the necessary components. You also will need access to a 3D printer for certain parts like the case, risers, and other bits and pieces. Those aren’t supplied so you’re on your own for their designs.

One mini Mac to go — The DIY device is built on a Latte Panda Alpha single-board computer (SBC), which has an Intel m3 CPU and integrated graphics, 8GB of RAM, and a built-in CPU fan. He added two other smaller fans, which are controlled via a DIY circuit board. The specs for the Latte Panda Alpha list built-in wireless functionality, but it seems he added it via a wireless M.2 card. macOS Big Sur was installed onto a 240GB SATA M.2 SSD. Battery life doesn’t look long based on the measly capacity he used, but who cares? This portable Hackintosh is a DIY masterpiece.

The fact that this SBC has two M.2 ports is just incredible — some PC motherboards only have one, or sometimes none — and it’s probably one of the reasons why it fetches such a high price. SBCs such as the ones from Raspberry Pi and Odroid may be affordable, but not the Latte Panda, which can cost upwards of $459 for the Alpha model. While iketsj doesn’t say how much it costs to build the handheld, it undoubtedly wasn’t cheap.

However, for makers like him, it’s not about the money, but the fulfillment from building something yourself. In the video notes, he states that it’s possible to install macOS on PC handhelds such as those from GPD, but he points out that doing so is not the same as a DIY handheld. It’s just too bad the Hackintosh scene is coming to an end, as Apple is transitioning its computers to ARM-based Apple silicon.

Still, for those that want something similar but don’t have the expertise or budget to do so, there is one option that is coming out this month.

It’s about time — The DevTerm from Clockwork Pi is a mini-computer handheld with a built-in keyboard, screen, wireless functionality, and even a thermal printer. The device has several CPU configurations, with the option to use a Raspberry Pi Compute Module 3+ Lite. It will run on Clockwork OS, which is based on Linux, though it seems other OSes such as Debian, Ubuntu, and Raspberry Pi OS may be alternative options. Linux isn’t macOS Big Sur, but for basic computing, it should get by just fine.

One of the great things about this product is that it requires assembly since it arrives packaged like a plastic model kit. Those who have experience building Gundam models will be delighted. Clockwork Pi’s previous product, the GameShell, also required assembly, and let me tell you: it was a lot of fun to build.

The DevTerm is slated to launch this June, with pre-orders still open. Prices range from $249 to $319 depending on the CPU configuration.