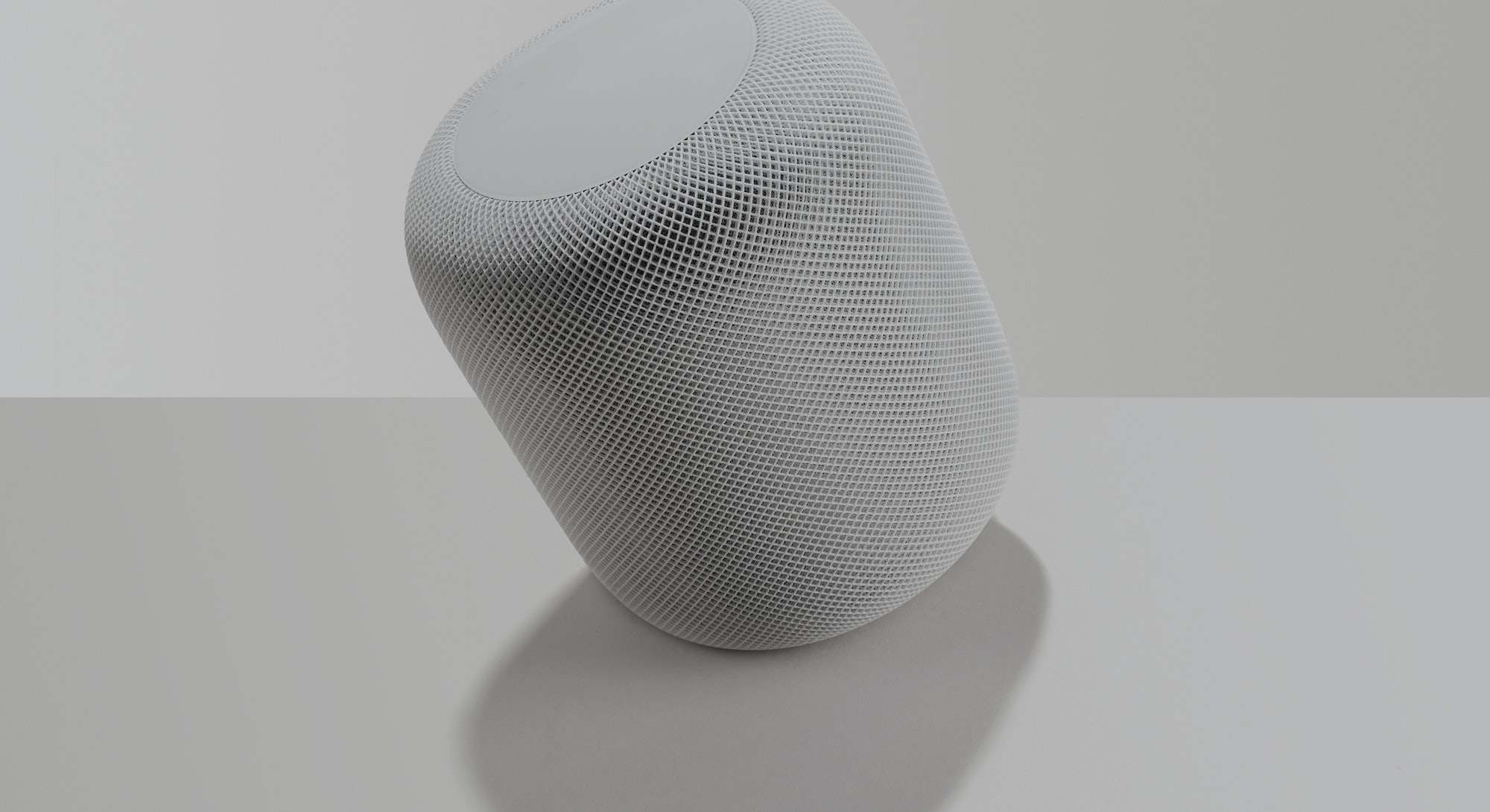 Apple’s HomePod is one of the most confoundingly flawed devices the company has ever made.

You’ll be hard-pressed to find a reviewer who will say it doesn’t sound amazing but equally challenged to find one who can wholeheartedly recommend you actually buy one.

HomePod's biggest pitfalls: It’s equipped with Siri, the least intelligent smart assistant. The voice controls only work with Apple Music. And it also costs more than nearly all of its competitors.

But HomePod could be great if Apple thinks different and turns it into a soundbar with an Apple TV built-in.

Nobody buys a smart speaker for the sound quality and the data is proof of that. Apple is estimated to have less than 5 percent of the global smart speaker market. The original HomePod’s failure is an example of incredible technology pointed in the wrong direction.

The recently unveiled HomePod mini seems to address some of the original product’s miscalculations. For one, at $99 it’s priced identically to Google’s Nest Audio and Amazon’s newest ball-shaped Echo, so it could be a more appealing sell to price-conscious buyers. While we’re still waiting to hear the verdict on sound quality, it’s not unreasonable to expect the HomePod mini to hold its weight against its peers if Apple’s track record from the original is anything to go by. Apple is also allowing some third-party streaming services onto both HomePods.

Unfortunately, the HomePod mini had to drop the original HomePod’s best feature to shave off $200: “spatial awareness,” or the ability to constantly adjust its sound profile relative to the room it’s in. The HomePod mini could sound terrific without spatial awareness, but it’s sad that Apple couldn’t bring that technology down to it.

The logical next step should be something that doesn’t sacrifice incredible sound and applies it to a real problem: the home theater.

If the HomePod mini is the first step in Apple rebooting its home audio brand, then the logical next step should be something that doesn’t sacrifice incredible sound and applies it to a real problem: the home theater. A forthcoming software update to the HomePod suggests Apple may be looking there already.

In the beta for tvOS 14.2, Apple TV 4K owners can set a HomePod as the default speaker for watching movies and shows. Additionally, a HomePod can simulate 5.1 or 7.1 surround sound, and Dolby Atmos. This is extremely exciting. I’ve used a variety of Dolby Atmos compatible soundbars, and they all come with their own sets of compromises, so it’ll be interesting to see how Apple handles the format on its speaker. Sadly, this feature will be limited strictly to Apple TV boxes. If you use any other devices with your TV like a game console, you’ll switch back to using whatever audio output you normally use. While we will need to test Dolby Atmos on HomePods before we know if it’s any good, it at least suggests the company has bigger plans with home entertainment setups.

A HomePod-branded soundbar with Dolby Atmos and a built-in Apple TV to boot would be one of the most compelling products from the company in a while. For the sake of this piece I’ll refer to the hypothetical product as the “HomePod TV.” Apple would solve a real pain point for many in the home theater market and, if priced right, could make the default recommendation for anyone looking for a meaningful upgrade in the living room.

A soundbar with a built-in streaming device is not a new concept. Roku sells two soundbars with integrated video streaming that cost less than $200. However, neither the $129 Streambar nor the $179 Smart Soundbar support Dolby Vision HDR or perform any kind of “spatial audio” simulation.

A “HomePod TV” would address all of these shortcomings — Apple supports all the HDR formats that matter (sorry HDR10+) and has all of the big streaming services — in a single device that plugs into your TV. Simplicity is why the Apple TV, despite it’s awful remote, has remained popular among home theater enthusiasts. Updating the Apple TV 4K with a chip that uses Apple’s Neural Engine to improve upscaling from HD to 4K (or even beyond) and redesigning the remote would be enough to make a lot of people happy. Bring those features to an incredible soundbar and Apple could have an instant winner.

The Dolby Atmos space is currently a minefield of dollars and compromise. For best results, customers need to pay thousands of dollars for high-end home theater equipment and in-ceiling speakers, plus professional installation if they aren’t comfortable drilling into their walls and running wires. While the Sonos Arc does provide phenomenal sound and a totally wireless setup for its optional subwoofer and rear speakers, the Arc costs $800 by itself. If you have a bigger room, you’ll probably want to set it up with a Sub and rears, bringing the price tag close to $2,000.

Cheaper soundbars with Atmos take one of two paths. Some require you to use rear speakers with integrated height speakers that need to be connected by wires to the subwoofer. These wires are unsightly and require extra work and money to hide. Many of these systems do sound good, however, and make a good middle ground between a basic stereo soundbar and a professional Atmos installation. However, many can’t tune themselves to the room, meaning you better be great at speaker placement if you want maximum immersion.

The other method used by affordable Atmos bars is to virtualize the effect. By using sound processing algorithms, soundbars can output 3D audio effects without the need for dedicated height speakers to bounce sound off your ceiling. This is also done by some premium Smart TVs. While virtualized Atmos sounds better, it’s not quite the full immersive effect of true Atmos through a proper multi-channel speaker setup. Think of it more as an improved and wider soundstage over truly mimicking the effect of real Atmos. This shortcoming is again a product of most soundbars not having any kind of room tuning.

Going back to Sonos, their soundbars can tune themselves thanks to the company’s TruePlay software. However, if you make any significant changes to your room’s acoustics you’ll need to retune manually as Sonos has yet to make TruePlay automatic.

This is where Apple’s opportunity lies: make a soundbar that costs less than a Sonos Arc that also leverages the spatial awareness technology already developed for the existing HomePod so it works seamlessly in any space, beating Sonos at their own game. Because spatial awareness is always adapting, the HomePod TV could adapt its tuning not just to the room it’s in, but to the individual viewers sitting in front of it every time it detects a new person coming to the couch.

Apple’s fledgling U1 ultra-wideband ecosystem could also be smartly implemented in HomePod TV. If the soundbar performs best by itself in rooms up to a certain size, Apple could allow users to pair it with HomePod mini speakers to act as rears to expand the soundstage in larger rooms. Thanks to the precision of ultra-wideband, the main soundbar would know exactly where the new rears were placed and what the environment around each sounded like.

Or, consider the company’s long-rumored AirPods Studio headphones. Spatial Audio on the AirPods Pro is already impressive, and it’s safe to assume that it will carry over to the forthcoming over-ear headphones, but with positioning from U1, a new Apple TV 4K box or HomePod TV could enable Spatial Audio on headphones as well. This means you’d be able to switch instantly from one superb Atmos experience to another if you need to put headphones on without sacrificing on picture quality by switching to your phone or tablet.

The demand for high-quality home theater experiences is growing as we spend more time at home.

The first HomePod solved a problem that nobody had. A smart speaker with audiophile-pleasing sound is excessive, but there is a real demand for good home theater peripherals. During the height of the COVID-19 pandemic, Samsung and LG set records for TV sales. The Sonos Arc has been on backorder practically since it was released. The demand for high-quality home theater experiences is growing as we spend more time at home, our entertainment preferences continue to move towards streaming services, and theaters remain unsafe for the foreseeable future. Apple has a big opportunity to meet this moment and put the audio technology they’re so proud of to use where people will actually be paying attention. The HomePod may have been a flop, but it could be reborn as a soundbar/set-top box champion.