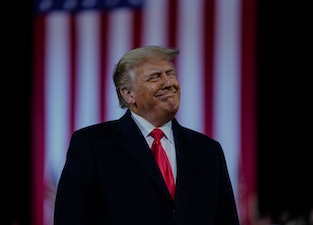 How much stake Parler reportedly offered the Trump Organization.

Why did Trump never join Parler? The former president, ever one to try and make a deal, apparently negotiated to use the "anything goes" alternative to Twitter as his primary social network in exchange for an ownership stake in the company. BuzzFeed News reports that Parler offered a 40 percent stake to the Trump Organization, but the deal fell apart after, well, Parler did.

Where was Trump? — The new information might explain why President Trump never signed up for Parler, despite frequently deriding mainstream tech — including Twitter — as being biased against him. Conservative allies including Ted Cruz and Sean Hannity created accounts and urged their Twitter followers to switch to Parler as progressively more conservatives were banned from mainstream platforms, but Trump was always suspiciously absent.

Representatives for Trump were said to have been in active negotiations for a switch to Parler right up until the January 6 insurrection at the U.S. Capitol, though others told BuzzFeed that negotiations ended earlier, after the White House counsel's office said any deal would violate ethics rules. Either way, talks seem to have come to a final conclusion after the Capitol riots, when Parler was kicked off every major platform and forced offline altogether.

Nothing surprising — Parler's former CEO John Matze recently told the Wall Street Journal that the social network reached 15 million users at its peak, including Trump's sons Eric Trump and Donald Trump Jr. But compared to the 88 million followers former President Trump had before losing his account, Parler was small potatoes. He likely knew full well that he would be a big draw for the burgeoning platform if he were to join.

Experts say that a deal to join Parler in exchange for compensation would violate anti-bribery laws. Not that such concerns were an issue for Trump — during his presidency, foreign dignitaries and others who wanted to curry favor with him, like T-Mobile executives, would regularly stay at Trump Organizations properties. And Trump had tried to host the 2020 G7 meeting at his Mar-a-Lago resort, which could have helped boost the image of the property.

It's possible that a deal a Parler could come together in the future. Even though the social network's owners fired Matze last week, it has been searching for a new hosting provider since being booted off Amazon Web Services and investor Jeffrey Wernick has said he believes Parler could come back online as soon as next week. Matze was reportedly fired after he indicated he would begin moderating the platform more in order to get its app back on Android and iOS.

Even if Parler does manage to come back online, it's not clear its once dedicated userbase will want to return. The site's poor security ended up exposing many rioters who breached the U.S. Capitol — even after they "deleted" their posts, they were still easily accessible, leaving evidence the U.S. Department of Justice has been able to use to make arrests. But, being uncharacteristically silent since he was deplatformed, Trump might be willing to join the network, and his loyal supports would surely follow.