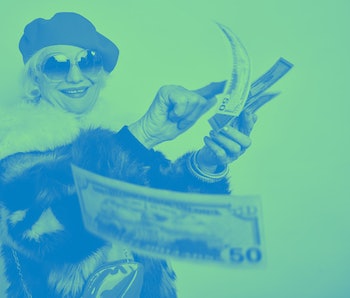 Two days ago, a beer company slid into my DMs with an offer to pay my monthly student loan bill.

My experience with Natural Light — lovingly shortened to “Natty Light” by friends — had both started and ended in college, where I’d spent many nights downing warm cans of the stuff while mingling on the sticky parquet flooring of strangers’ dorm rooms. I didn’t follow the brand on any social media and hadn’t really thought of it in years.

The direct message preview in my Twitter inbox didn’t reveal much: “Hey! We saw your tweet about….” A marketing ploy of some sort, I figured.

Natty Light wanted to help with my student loan debt. I texted a few of my friends — was this a joke? Are they going to ask me to chug a beer on Instagram live, influencer-style? Friends told me not to hold my breath and to wait to count it as a blessing until the money was safely deposited in my bank account.

A few hours later $400 showed up in my account.

Like many millennials, I have long struggled with student loan debt. I would love to save some money for my “future,” but that’s always been a pipe dream — more so now than ever, given the precipitous financial instability of the world writ large in every newspaper headline and social media post.

Perhaps I can look forward to a semblance of financial stability if the federal government gets its act together and delivers a COVID-19 bailout check to my mailbox. Or maybe the winner of the 2020 U.S. presidential election will cancel student debt altogether (yeah, okay, probably not). But I'm not holding my breath, I mean not when I'm indoors at least.

Instead, Natural Light delivered my small miracle via Twitter DM. Not the government, not a politician, not even a charity — a low-calorie beer brand.

I hadn’t reached out to Natural Light. Every year, the company has run a contest where it gives away a total of $1 million to help relieve student debt — but I didn’t even enter the contest. Natty Light later told me in an emailed statement that the company saw many people worried about student loan debt on social media and decided to help a random few relieve that stress. Natty Light saw my panic-stricken tweet and wanted to help.

“With today’s uncertain times, monthly student loan payments should be the last thing recent grads need to worry about,” the company stated. “Natural Light realizes the burden that student debt can have during this unprecedented crisis.”

This stands in stark contrast to how elected officials have treated the current economic crisis. The federal government has been dragging its feet on a sweeping aid package; only now, weeks after the virus’s detection in the U.S., are lawmakers nearing an agreement. And there’s no telling how long the eventual bailout will take to arrive in people's bank accounts.

I am not the only one finding private companies surprisingly generous right now. Brands are taking matters into their own hands. Yelp and GoFundMe are matching donations to struggling businesses. Jack Dorsey-owned Cash App is giving away more money than ever on Twitter. Postmates is helping its staff with medical expenses. Netflix created a $100 million fund for production crews. Even Facebook is giving its employees $1,000 checks.

When those in power fail us, we turn to each other for support.

Individuals are helping each other, too. Google Docs are being widely shared across social media with resources for those in need of assistance, and new mutual aid funds are popping up every day. Communities are looking out for each other. When those in power fail us, we turn to each other for support. The internet is proving an invaluable resource in that effort.

I’m trying not to let the dystopian texture of all this sour Natty Light’s generosity. But listen: a beer brand just paid my student loan bill! That’s absurd! The federal government has held its aid in limbo for so long that my favorite, inexpensive college beer had to step in and help.

I am very thankful for Natural Light’s assistance. But the livelihood of an entire country can’t be left up to private companies. I’m already worried about next month’s bills. Unless the federal government steps up to help, I might need to look into entering a few more Twitter giveaways, and that's a wild state of affairs in one of the richest nations on earth. It's enough to make you drink.