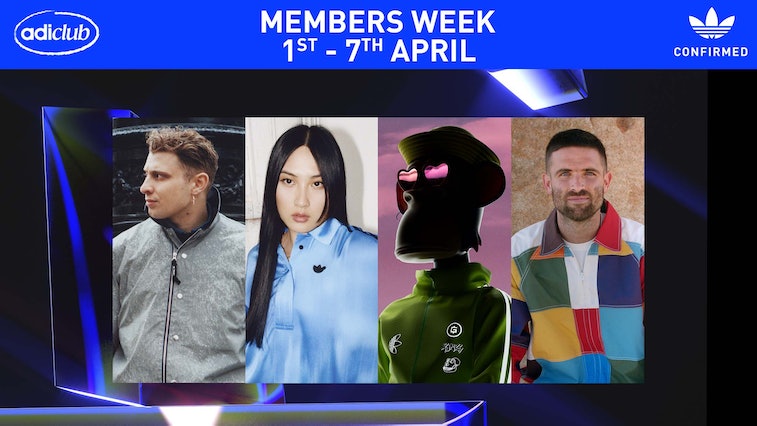 Adidas is diving back into the metaverse. To kick off its annual Members Week, the brand will revisit its “Into the Metaverse” NFT release from last December — a collaboration with Bored Ape Yacht Club, Gmoney, and the PUNKS Comic team — giving Adidas fans an opportunity to win one of 50 NFTs for free via raffle.

Members Week begins April 1 and will include more than nun-fungibles. Exclusive releases and activations are planned for the seven-day event, including the launch of adiClub, an updated version of the Creators Club that allows members to earn points across the Adidas space.

Exclusive events — Adidas’ Confirmed app users will receive exclusive access to the launches and well “Into the Metaverse” raffle. Those in the U.S., U.K., France, Germany, The Netherlands, Spain, Canada, and Japan will be able to enter the draw first on April 1, with winners of the NFTs to be announced April 4. Confirmed users will also receive early access to events hosted on (and off) the platform itself.

Through in-person events in Paris, London, Berlin, New York, and Tokyo, Adidas will introduce an editorial focused on inclusive sizing — a topic the brand has made headlines for before —and reintroduce its S.E.E.D. initiative. The latter, short for School for Experiential Education in Design, is a partnership with Pensole Design Academy that welcomes new talent to Adidas and the wider streetwear industry.

Hot drops — Alongside its exclusive events, Members Week always guarantees a slew of new releases: Up first is an A.B. Gazelle Indoor sneaker reimagined by pro skater Blondey McCoy. The shoe combines utilitarian style with ‘80s terrace culture, while a heavy ripstop upper and upgraded base make the shoe extra durable for skating.

Frequent Adidas collaborator Sean Wotherspoon also has something to offer, putting forth his latest spin on the EQT 93. The designer’s signature technicolor details and embroidered flower motifs cover the sneaker’s synthetic upper and are accented by a rugged rubber outsole.

Looks from Adidas Originals’ second Blue Version collection will pre-release alongside the aforementioned sneakers as archival Adidas pieces are reimagined for the future. Graphic and hi-vis apparel like cargo shorts, tees, elongated vests, and wind jackets add an element of high-fashion to Adidas’ own label, following its collaborations with Gucci and Prada (Balenciaga could also be in the pipeline).

All exclusive activations, events, and sneaker launches — including a few surprise releases — will be available within Adidas’ Confirmed app. You’ll want to keep an eye on the platform all week so you don’t miss out on anything.