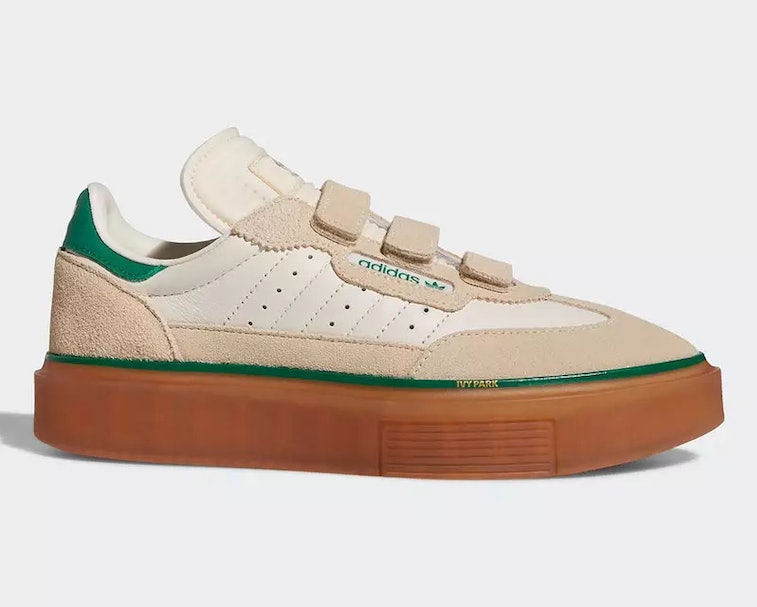 If you’re gonna invest in a bold, new sneaker as the weather heats up, it might as well be Beyoncé’s. As part of her ongoing Ivy Park line with Adidas, the superstar is taking two classics and turning them into one sneaker of the summer, dubbed the Super Sleek “We Stan Summer.”

The sneaker combines Adidas’s iconic Stan Smith and Samba silhouettes to create a shoe that’s as grand as Queen B herself. Ivy Park and Adidas have already produced other iterations of the sneaker, including the Super Super Sleek and the Super Sleek 72. Despite the name, the shoes are more maximal than minimal, opting for exaggerated proportions.

Go big or go home — A dramatic, oversized sole is naturally what first catches the eye. The midsole takes up about half of the overall shoe and makes a further statement with the use of semi-translucent gum. The Samba sneaker lends its look to the Super Sleek through its multi-strapped tongue and narrow toe box.

The Super Sleek appears in a color palette of various beiges and creams, a more understated option than the bright neon pinks and fluorescent greens we’re used to seeing from Ivy Park. The sneaker’s upper balances overlapping layers of leather and suede for a mix of textures, and the Beyoncé label adds a stamp of branding to the tongue. Bright green — referencing back to the classic Stan Smith — appears at the heel, Adidas branding, and midsole striping, while a gold “Ivy Park” is printed on the latter stripe.

This Ivy Park drop won’t be featuring any 30-piece apparel launches, but the sneakers can be paired with three different pairs of crew socks. The first two feature co-branding in the form of Adidas’s typical Three-Stripes and Ivy Park logos, and the third is a canvas for Ivy Park’s monogram. A pack of all three pairs is listed at $35, pairing perfectly with the sneakers in cream, white, and green colors.

Beyoncé’s Super Sleek kicks will be available at 12 p.m. ET on May 27 for $120 on the Adidas website. If these are on your wishlist, be prepared to act fast, because the Beyhive is already buzzing with anticipation.