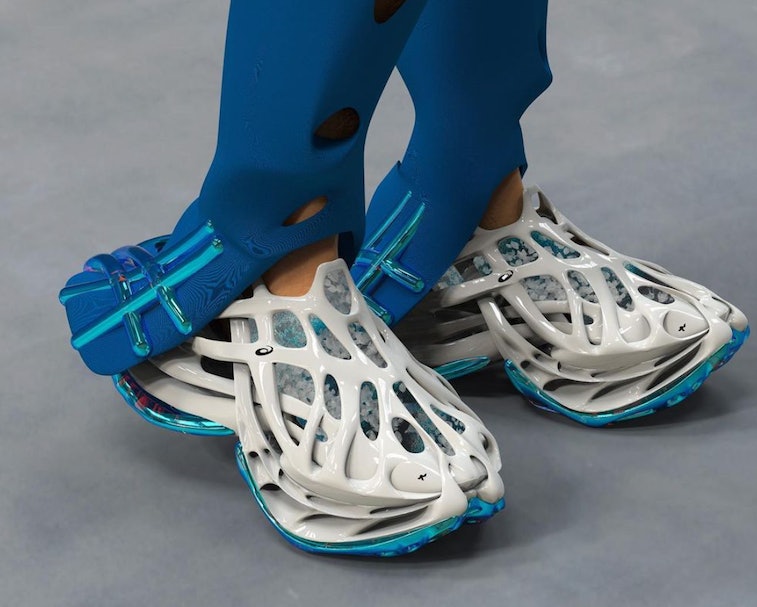 French industrial designer Kacimi Latamene has turned Asics sneakers into something covetable by hypebeasts. Debuting her concept on Instagram, Latamene showed off an array of “sneakers” made from an oversized, perforated shell and lined with a form-fitting sock. But commenters were quick to point out that the design looked less like an Asics sneaker and more like a Yeezy model — particularly the line’s best-selling Foam Runner.

Aware of the resemblance or not, multiple comments also began asking where they could buy the futuristic shoe and when it would drop. Latamene’s chunky concept, however, isn’t backed by Asics and has no known plans for production and distribution — although it’s interesting to see the change in design attract hypebeasts to a brand outside their usual rotation.

Is design or exclusivity more appealing? — With a focus on performance, not exclusivity, Asics isn’t considered as “hype” as other brands like Yeezy or Nike. But Latamene’s revamp, which now makes Asics everything it usually isn’t — limited, out-of-reach, and impractical — clearly appeals to a demographic the brand hasn’t reached before.

Yeezy’s Foam Runner, which boasts a design very comparable to Latamene’s, quickly gathered a following thanks to its bizarre silhouette and celebrity backing. Each release of the slipper instantly sells out and resells for up to seven times its $80 retail price. Could the same be said of Asics if they adopted Latamene’s concept?

To be fair, Yeezy is backed by Kanye West, the entire Kardashian family, Travis Scott, and about half of Los Angeles celebrities. And while similar to the Foam Runner, Latamene’s Asics model isn’t as wearable — she noted in an Instagram comment that the shoes weren’t tangible, but a 3D rendering. Actually producing them would likely require an altered design, and the approval of Yeezy’s legal team.

Asics could go virtual — Still, Asics could use Latamene’s wild design to its advantage, catering to hypebeasts in another realm. With the rise of digital fashion, luxury video game collaborations, and non-fungible tokens (otherwise known as digital collectibles), online consumers are hungry to get their hands on something futuristic and exclusive.

By following the lead of companies like Gucci and RTFTK Studios — both of which have created virtual-only sneakers — Asics could sell Latamene’s 3D rendered shoe for consumers to wear online or through an app. By the looks of her Instagram comments, most hypebeasts would be willing to pay for the glossy “sneaker,” in real life or not.