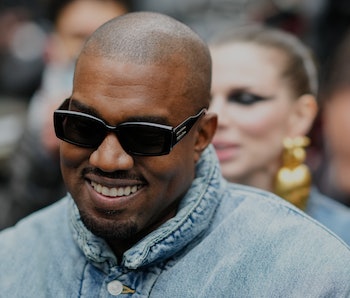 Despite Adidas putting hundreds of millions of dollars into his pocket, Kanye West just can’t quit Nike. The Yeezy mogul used a 2020 podcast appearance to plead his case for the ability to wear Air Jordans and Swoosh-branded collaborations with his friends, and ever since he’s gone ahead and worn Nike products at will — even putting them front and center for a televised advertisement for his album Donda.

In 2022, the conflict of interest has only become more flagrant. After Michael Jordan’s son Marcus suggested that he’d like to see West collaborate with his father’s brand, the artist now known as Ye posted the Jumpman logo on his Instagram page along with the eyes emoji as a caption. The chances of Adidas signing off on a project with its biggest rival are practically zero, but that hasn’t stopped the Chairman of Jordan Brand from fanning the flames further.

In an interview with NPR, Jordan head Larry Miller praised West and said he wished the rapper and designer had never left Nike. “I can’t say that will not happen,” Miller added, referring to the possibility of collaborating with the enigmatic celebrity. “I don’t know that it will, but I can’t say that it won’t happen, that we would at some point be able to do something with Kanye. I can’t say that it’s absolutely not going to happen.”

How about an eye-roll emoji? — Adidas choosing to collaborate with other sneaker manufacturers isn’t entirely unprecedented, but it has happened in the past under very specific circumstances. A crossover event involving Damian Lillard’s Adidas sneakers and Shaquille O'Neal's from Reebok did go down last year, but that was while Adidas still owned Reebok and had yet to finalize its sale.

2021 also saw the beginning of a high-profile partnership between Adidas and Allbirds in the name of making progress in sustainability. Even though the two brands are ostensibly competitors, they still primarily operate in different spheres. Adidas is one of the leading forces in sports performance and highly sought-after sneakers, while Allbirds draws a crowd more indifferent to trends and athleticism with its sustainably produced, inoffensively simple shoes. Thus they can share their respective innovations in more environmentally friendly production without stepping on each other’s toes.

Miller may say Jordan won’t not collaborate with West, but there’s simply no way Adidas will let that happen while its biggest star is still under contract. Nike is too obvious of a competitor and the one company standing in its way of the top spot in the world.