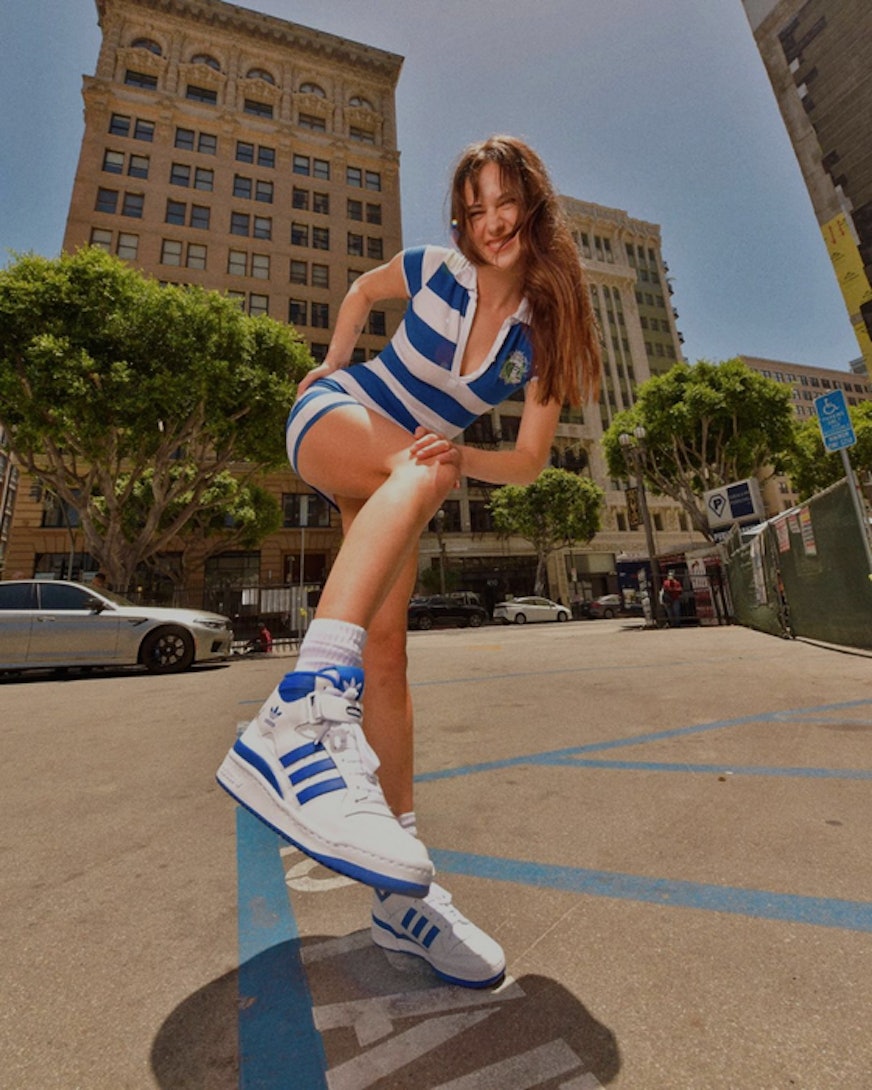 In 2021, your chances of buying a Nike Dunk at its original retail price are probably about the same as winning the lottery.

Between high demand, resellers, limited stock, bots, and actual lottery-based draws, your odds of scoring the silhouette are slim. And despite Nike’s constant Dunk drops, it’s nearly impossible to own a pair, unless you’re willing to fork out hundreds — or thousands — on a resale site in order to obtain your desired style.

This inaccessibility is exactly what fuels demand for the Dunk, and hyped products in general. In clout culture, merchandise’s value depends on its exclusivity, thanks to consumers appreciating surrounding hype rather than an actual product. Put plainly, hype is dependent on having the hottest items of the moment, at that moment — and once an item becomes more attainable, its demand plummets.

When Travis Scott fatefully adopted the Dunk look a few years ago, drops of the sneaker sold out in minutes and models resold for thousands of dollars above their retail price of $100 to $120. Today, that hasn’t changed — but Nike’s overwhelming amount of Dunk releases is tiring consumers, even those that have yet to score the sneaker.

Until consumers are able to attain a Dunk with ease, demand for the shoe won’t stop. Nike, profiting off of the seemingly endless hype, is well aware of the fact — and while its constant drops give off the impression that it’s catering to sneakerheads, the reality is that each release seems more limited than the one that came before. Consumers can either wait around until they’re lucky enough to cop a Dunk — any Dunk — or they’ll move on once their frustration with the SNKRS app peaks. Here, there’s just enough dissatisfaction with the Dunk that a competitor could muscle its way in by offering everything Nike can’t.

Adidas is capitalizing on the Dunk hype by bringing back an old basketball shoe of its own: the Forum. Making its debut in 1984 — a year before the creation of Nike’s Dunk — the Forum boasts a retro leather upper akin to the Dunk, offering a sneaker that can be taken anywhere from the streets to the skatepark. Low and high-top versions, as well as a multitude of designs and collaborations, are what make the Forum as customizable as the Dunk, too.

But the Forum, unlike its competitor, is currently available on Adidas’ website, with multiple designs to choose from. Ranging from $90 to $160, the model aligns itself with a similar price point to the Dunk — though consumers can buy as many Forums as they want, in the color they desire, while Dunk buyers desperately try to get their hands on any Dunk in order to flex the model.

Only one design element keeps the latter from giving up and switching to the Forum sneaker. No matter how many comparable features Adidas’ shoe flaunts, it may never see the same hype as its competitor — all because it doesn’t bear Nike’s signature Swoosh logo.

Thanks to the brand’s celebrity endorsements and wide range of designs, Nike has currently cemented itself as the world’s favorite sneaker provider. There’s a reason Drake raps about “checks over stripes” and Kanye West disregards his Adidas contract to wear Nike — owning a sneaker with a Swoosh on it is somewhat of a status symbol. Just like at the hype of any limited-edition Air Jordan.

What’s ironic is that owning a Forum when they debuted in 1984 was more of a status symbol than any Nike shoe. When the Forum first launched, it was one of the most expensive shoes on the market, with a staggering price tag of $100 (equivalent to $257 today). And while StockX may convince us that’s a deal today, triple-digit price tags weren’t normal for sneakers in the ‘80s. Nike’s competing models, like its AirShips, were priced at around $65. Owning Forums at the time was the ultimate flex.

Of course, Nike’s sneakers are now some of the most expensive (and coveted) kicks on the market. But with its Dunk becoming unattainable despite oversaturating the market, another sneaker could soon take its place. Before long, the Forum could be a status symbol once again.

Nike has its Air Jordan line, limited edition retro shoes, and most importantly, Virgil Abloh. But at one time, Adidas held similar cards: Shortly after the release of the Forum, in 1986, Run-DMC released a song called “My Adidas,” repping Superstars and highlighting the brand as the top sneaker label of the time. Everyone who was someone wore Adidas — until pop culture shifted and Jordans took center stage.

And while Adidas’ 2003 to 2015 partnership with Jeremy Scott brought the brand some hype, it wasn’t until Kanye West signed with the label in 2013 that actual clout chasers began repping Adidas again. The brand’s Yeezy Ultra Boosts and NMDs catapulted Adidas back into the spotlight, before Nike recruited Virgil Abloh for The Ten collab and made its sneakers just as exclusive as Yeezys. It’s not impossible for Adidas to climb its way back to the top — but it’ll have to compete with the wide portfolio of sneakers and celebrities behind the Swoosh’s product.

Recent years have seen Adidas building its own resume: After signing Kanye, the brand launched Ivy Park in collaboration with Beyoncé, elevating both its womenswear offerings and fanbase. Her name holds weight — perhaps even more than Adidas’ own — and plenty obsess over what she wears. Beyoncé’s online community, the BeyHive, is notorious for its dedication to their leader — so when she signed on as creative director of Adidas in 2019, thousands of fans followed in her footsteps, pledging allegiance to a brand backed by Queen B. Ivy Park’s utilization of the Forum sneaker has no doubt boosted sales of the sneaker.

A quick stint with Jonah Hill in 2020 carried Adidas over to its next big partnership, which debuted this year. With a little help from Bad Bunny — one of the biggest artists at the moment — Adidas secured another popular face for its Forum model, as well as a huge Latin fanbase. Benito’s Forum drops always garner hype, maintaining insane resale prices that rival the Dunks’. Even those that miss out on the collaborative releases are buying regular Forums in order to rep the same look as Bad Bunny.

And just as Nike pulled out the Dunk to satisfy retro shoe lovers, Adidas has brought back ‘00s collaborator Jeremy Scott, whose designs were among the most coveted sneakers of the decade. Scott’s popular JS Wings line — which Adidas has already confirmed will be returning — even secured a collaboration with a young A$AP Rocky.

Celebrity collaborations have slowly reintroduced the Forum to the public

For the return of its old-school collaborator, Adidas has whipped out a similarly time-honored shoe: Scott revealed his first project with the brand would revamp the Forum Hi, dressing the sneaker in a jelly-like texture. His modern designs, paired with consumer nostalgia for older shoe models, may just see the Forum rise to fame in the same way the Dunk did — but designer Scott must topple the other famous Scott’s Nike-favoring influence.

Celebrity collaborations have slowly reintroduced the Forum to the public, but in today’s world, it takes more than a famous face to sell a product. Consumers want relatable advertising; something that makes the brand look less like a massive corporation and more like a label that understands its customers. It’s the perfect setup for Adidas to use its underdog reputation to appeal to a new group of consumers.

The only thing cooler than owning a sneaker belonging to the likes of Travis Scott and Justin Bieber is owning a sneaker no one else does. And by carefully seeding its Forum model to indie darlings like Devon Lee Carlson, Salem Mitchell, Kevin Abstract, and Steve Lacy, Adidas is catering to people who love to appreciate things that are neglected by the masses in the way the Forum has been.

Said consumers are namely part of Gen Z, a young generation proven to start and end trends in record time. They make up most of the aforementioned influencers’ followers, as well as Adidas’ most desirable marketing demographic — giving Gen Zers the power to decide whether the Forum makes a comeback or not.

Should the young generation give Adidas’ model a chance, the Forum could easily rise in popularity thanks to Gen Z’s stack of disposable income and massive social media presence. But if Zoomers don’t want Adidas’ Forum — despite the careful marketing, celebrity endorsements, and indie seedings — the sneaker won’t be able to compete with Nike’s Dunk. The fate of the Forum is in their hands.