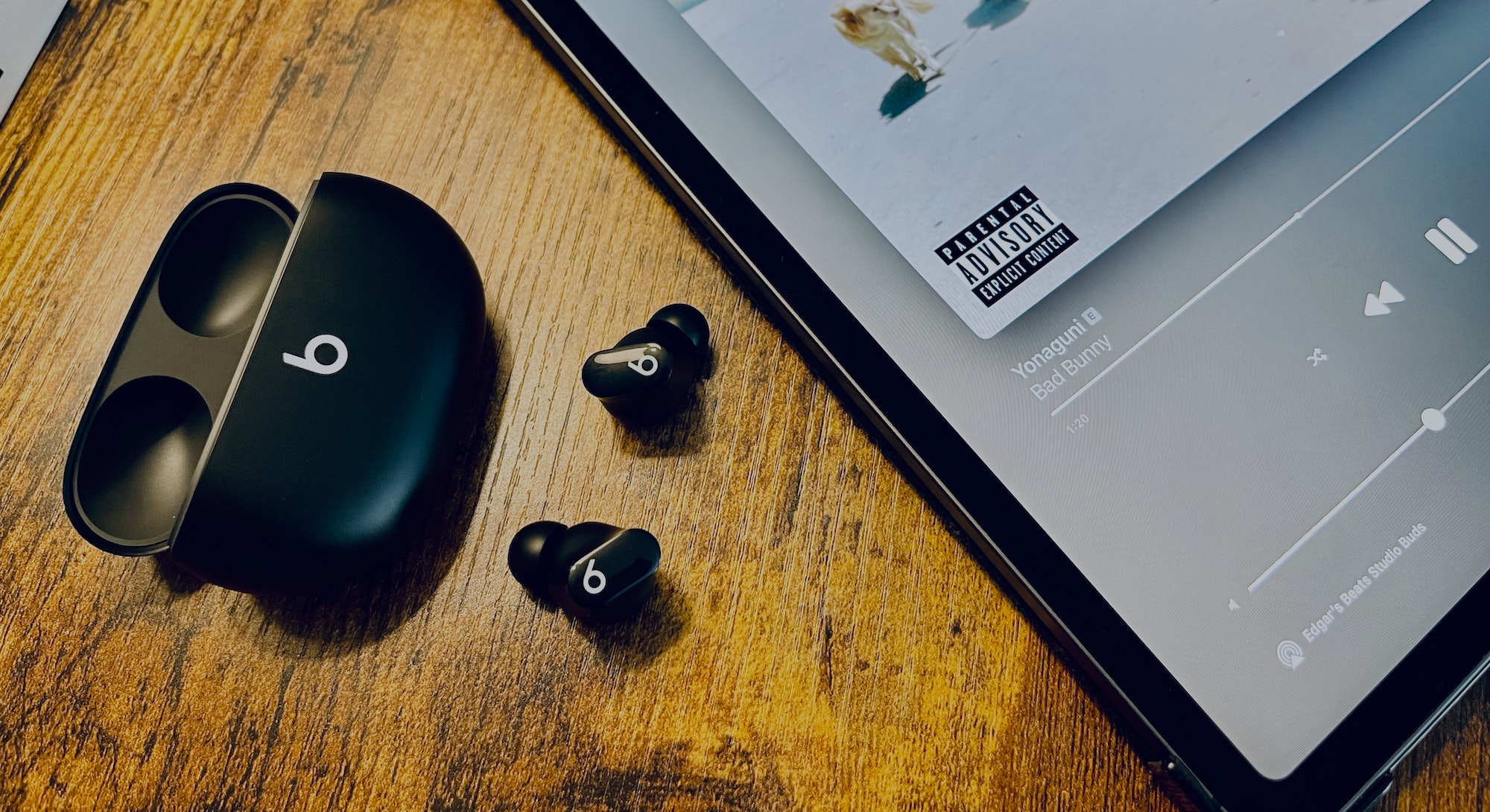 My go-to for listening to music has been the Powerbeats 4 x Ambush headphones. But it may be time to ditch them for Beats’ new Studio Buds. At $150, the true wireless earbuds are loaded with features — many of which are available in Apple’s $250 AirPods Pro — that are hard to ignore.

For starters, the Studio Buds are the first Beats wireless earbuds to come with active noise cancellation, a feature that is now pretty standard. Everyone’s wireless earbuds from Apple to Amazon to Google have ANC so Beats is playing catch-up here. That said, the ANC in the Studio Buds works really well at blocking external noise — a necessity to block out all the cars honking when I’m out on a run in NYC. This isn’t surprising since Beats is owned by Apple, after all, and AirPods Pro has great ANC.

In situations where it makes sense to be able to hear your surroundings, the Studio Buds have a “transparency” mode, which works exactly as it does in AirPods Pro and AirPods Max. You’ll still hear your music, but ambient noise is mixed in a very natural-sounding way.

Switching between ANC and transparency modes is simple: long press on the “b” Beats logo button on either earbud or, if you have an iPhone, toggle it from Control Center or the Bluetooth settings. Beats says that with ANC or transparency on, the Studio Buds last up to 5 hours for listening and up to 8 hours with them off. With ANC, that’s as long as Samsung’s Galaxy Buds Pro and Amazon’s Echo Buds 2, and 30 minutes longer than AirPods Pro. The carrying case holds an additional two full charges, meaning you can get up to 15 hours of total listening time with ANC/transparency on and up to 24 hours without.

In my week of testing, those hours are right on the money. I’m even more glad that Beats went with a USB-C port instead of Lightning on the charging case. One place Beats shaved on cost: there’s no Qi wireless charging. It’s not essential for wireless earbuds by any means. The case itself is pretty minimalist and similar to that of the AirPods Pro, only rounder. These being made by Beats and not Apple, they come in red and black, in addition to white.

Another feature that makes Studio Buds more Android-friendly than AirPods.

Fit-wise, the Studio Buds are comfortable and so light that I often forget I’m wearing them. I did have to swap the ear tips to make sure they locked in more securely, but that’s usually the case with all my earbuds, anyway. Thankfully, as you might expect, Beats includes a few different ear tip sizes in the box, so you should have no issue finding your ideal fit.

Before we go any further, let me get one thing out of the way: there’s no Apple H1 chip in the Studio Buds, like in the AirPods Pro or AirPods Max, which allows for fast-pairing between Apple devices. Instead, Beats built its own, bespoke platform for the Studio Buds, which is what allows it to offer one-touch pairing with Android devices (running Android 6.0 or later) that have Google’s Fast Pair enabled. Another feature that makes Studio Buds more Android-friendly than AirPods: support for Google’s Find My Device, which is great news for people who want Beats earbuds but don’t own an iPhone.

Okay, now let’s talk about what’s really important: sound quality. Basically, the sound in the Studio Buds surprised me so much that I haven’t touched my over-ear Beats Studio 3 ANC headphones since they came in. The Studio Buds sport custom 8.2mm, dual-element diaphragm drivers that Beats says are designed to “deliver powerful, balanced sound while managing the complexities presented by active noise cancellation.” This driver setup essentially allows the Studio Buds to pump out more dynamic range with very little distortion that balances the lows, mids, and highs.

I listen to everything from Bad Bunny to the Beatles, to Drake and Olivia Rodrigo, and I love how regardless of genre, vocals, melodies, and instrumentals come through rich and clear with and without ANC. Beats used to have a stigma of going too heavy on the bass in its headphones, but it recalibrated its sound signature years ago. I’m happy to say music doesn’t sound bumpy or destroy an artist’s voice on the Studio Buds. Even in transparency mode, songs sound clean; other wireless earbuds have similar “ambient” modes, but they often sound hollow or static-y.

A game-changer for casual and hardcore music fans.

Then there’s the spatial audio compatibility, which lets you listen to tracks that have been mixed in Dolby Atmos. Apple has been pushing spatial audio to as many of its products as possible — HomePod, AirPods, Macs, Apple TV, etc. — and now Beats is jumping on board, too. Spatial audio is the kind of mind-blowing 3D surround sound experience that once you hear it, stereo just doesn’t cut it anymore.

When properly mixed, your music can sound different — sounds have more presence in each bud and lyrics come through clearer with more distinct separation. There’s a reason why music experts like Zane Lowe say spatial audio will “transform” the industry. The fact that you can this next-gen audio in a pair of earbuds that cost $150, not $300 or $500 like AirPods Pro or Max, is a game-changer for casual and hardcore music fans.

Besides listening to way too much Bad Bunny, I often use my headphones/earbuds for taking phone calls (as do many people nowadays). To help with that, the Studio Buds have dual beamforming microphones that Beats says are designed to target your voice and filter out wind and other noise. From all the calls I used the Studio Buds for, people said they could hear me clearly.

While I mostly have praise for the Studio Buds, they aren’t perfect. My main gripe is the multi-function “b” button that’s on each earbud. As I mentioned earlier, it’s for toggling between active noise cancellation and transparency mode, as well as play/pause, previous/next track, and accepting/ending calls. I really wish there was a way to control volume. Maybe it’s no biggie to you, but it’s a major annoyance to me. Because if, say, I’m in the middle of a run and want to change the volume, I have to fish out my phone. Other wireless earbuds like Master & Dynamic’s MW08 have physical volume buttons, but they cost more.

Beats says it’s looking at ways to let people customize those buttons in the future, but for now, you’re stuck with no way to adjust the volume. That’d be great because other buds let you customize buttons or touchpads for volume control using an app.

At launch, the “b” button only controls ANC/transparency modes or brings up your voice assistant. If you’re on an iOS device, there’s hands-free “Hey Siri,” so you don’t have to use the physical buttons from the earbuds when you want to summon it. And no, sadly you can’t be like, “Hey Siri, turn down (or up) the volume.”

All in all, at $150 and with a few color options, the Studio Buds are a superb alternative to Apple’s $250 AirPods Pro or Sony’s $280 WF-1000XM4 — although the latter feature some of the best active noise cancellation in the game, a whopping 8 hours of battery life with ANC, and arguably superior sound. But from a value standpoint, $150 for ANC earbuds is really hard to beat. Amazon’s $120 ($140 with wireless charging) Echo Buds 2 might be the only pair that come close, but they also don’t support spatial audio.

Apple could’ve easily called these the AirPods Pro Lite and nobody would complain. But they’re the Beats Studio Buds — and they’re going to sell very well.