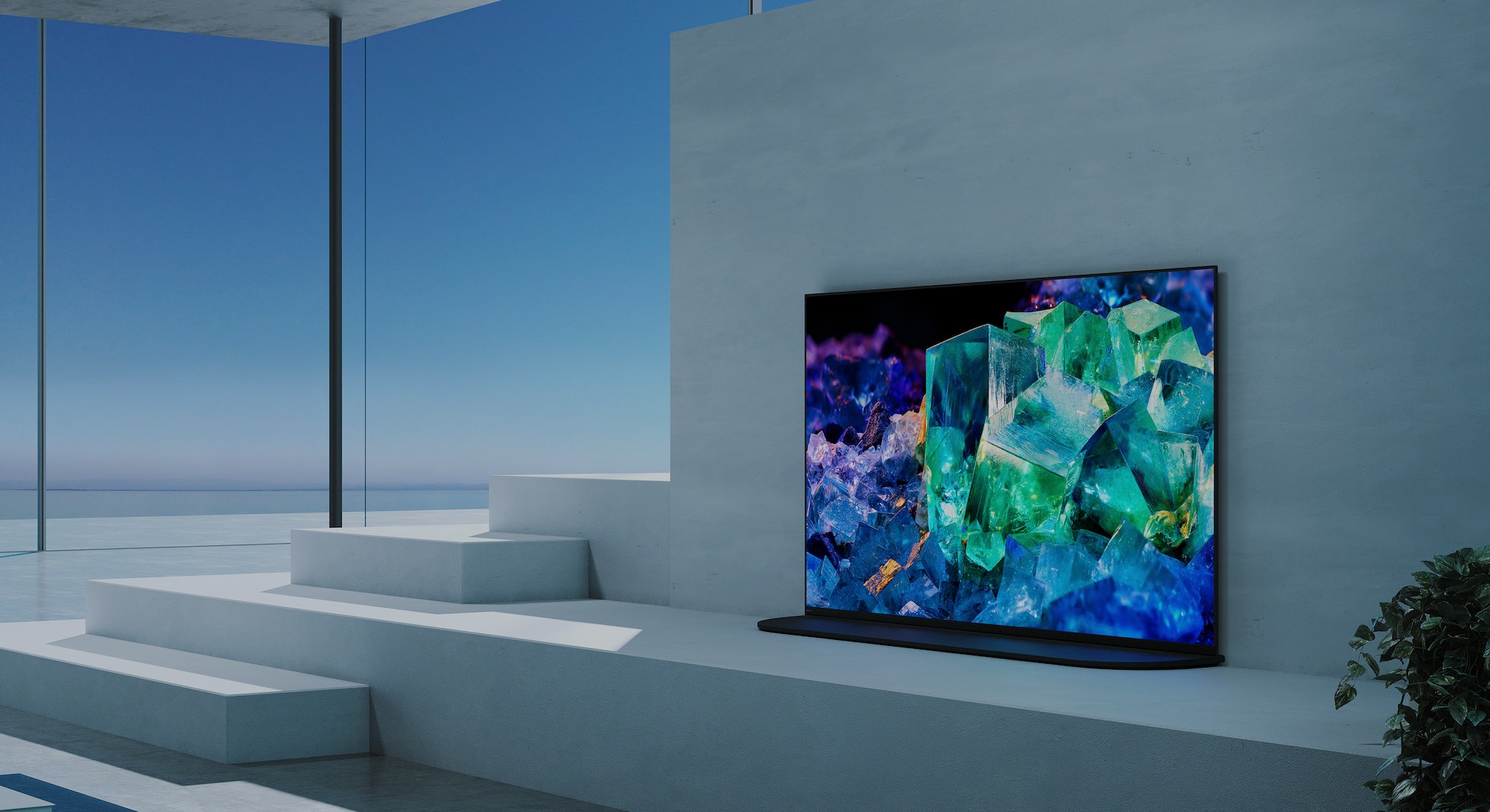 CES 2022 was chock full of exciting TV announcements for anyone considering a home theater upgrade this year.

From QD-OLED, a groundbreaking new display technology that (probably) won’t cost as much as a new electric car, to Mini LED technology that continues to saturate the mid-range TV space, 2022 is going to have some terrific TVs for almost any budget.

I follow the TV space obsessively, so I’m here to help break down which TVs announced at CES are actually worth picking up this year when they hit shelves in a few months. And, even if you don’t buy a TV this year, the innovations on display from TV manufacturers will more than likely make their way into your living room one day.

Sony has long been using OLED panels made by LG Display in its industry-leading Bravia OLEDs. But, at the top of its lineup at least, the company is switching to a new QD-OLED display made by Samsung Display in the new Sony A95K.

QD-OLED has enthusiasts excited for lots of reasons. Thanks to an entirely new manufacturing process, this breed of OLED panels works by filtering light from an entirely blue OLED layer through layers of red and green quantum dot film. This promises brighter TVs with even better colors than current OLEDs are known for. They should also be more durable and less prone to burn-in than current OLED panels.

Sony being the first manufacturer to adopt QD-OLED is a natural fit. The company has already made better-looking OLED TVs than even LG for years thanks to its superior picture processing. Having an even more capable OLED panel at its disposal has me dreaming of the possibilities.

The A95K is going to be very expensive as Sony’s OLEDs already command a $1,000+ premium over comparably sized LG TVs, and a new panel technology is only going to add to that inflation. The A95K will also only be available in 55- and 65-inch screen sizes, so it may not be large enough for every early adopter. But don’t be mistaken: QD-OLED is going to shake up the premium TV space for years to come and lead to much more aggressive competition among every company in the space.

The LG C-series has long been the go-to for anyone who wants a top-of-the-line OLED panel, and this year LG finally is making the C-series brighter. Using the new “EVO” panel technology that was introduced on last year’s LG G1 and the Sony A90J, the 2022 LG C2 should boast noticeably better color accuracy and brightness than any prior LG C-series model.

The G-series wasn’t left in the cold either. On the 2022 LG G2, LG is using a heatsink to help the EVO panel boost to even brighter levels than last year’s G1 and this year’s C2. The Sony A90J also employed a heatsink to great success last year, so I’m expecting great results from the G2.

There are also way more size options for prospective buyers this year. The G2 maxes out at an eye-watering 97 inches, and the C2 is available in sizes as small as 42 inches, targeting gamers and desktop usage.

With higher brightness across the lineup and more sizes on offer than ever, LG’s 2022 OLEDs are the best rounded lineup available. Coming Mid 2022.

While Samsung’s premium TVs continue to disappoint with their lack of Dolby Vision HDR support, the company’s “Lifestyle” TVs did catch our eye this year. Full disclosure: I am not at all the customer for the Samsung Frame, Serif, or Sero TVs. Their panel quality, peak brightness, and backlight technology just don’t cater to my home theater/gaming use cases. But that doesn’t mean these TVs don’t make an impact in the minds of a more mainstream audience.

I actually had a non-tech savvy friend ask me about the Frame recently, which just drives home the fact that just because a TV doesn’t appeal to enthusiasts, doesn’t mean it’s not great for some people. So, Samsung taking steps to improve this product can only be a good thing.

A new matte display eliminates glare on one of Samsung’s most interesting TV lines. Coming mid 2022.

This year, Samsung is giving its Lifestyle TVs a much-needed cover glass upgrade, to a new matte material that actually feels like canvas paper. This should make the touch-enabled TVs more pleasant to use and, more importantly, easier to look at in a bright room. The biggest difference will be made for the 2022 “Frame” TV, the flagship lifestyle TV which is meant to be wall-mounted and displays real artwork when not in use. It also comes in a wide variety of sizes this year, from 32 to 85 inches.

Again, these are not TVs for enthusiasts, but the improvements here are arguably going to be felt by more people than those that are targeted at people like me.

For 2022, Sony is jumping on the Mini LED train with the X95K. This promises to be one of the most exciting LCD TVs available in 2022 if Sony’s past models are anything to go by. Mini LED-backlit TVs are much brighter than LCDs with a local dimming array, while creating deep blacks and contrast that are nearly as perfect as OLED TVs. Given that Sony’s local dimming TVs managed to outshine TVs with far more control zones, I’m very intrigued to see what Sony is able to do with a superior backlight technology like Mini LED at its disposal.

The X95K is likely going to be expensive compared to other LCDs, but if Sony executes this TV right, it could make a very good case for consumers to choose the X95K over OLED TVs from LG if the price is right. Add in features that Sony is bringing to its entire 2022 lineup, like variable refresh rate (VRR) and auto-low latency mode on day one for gaming, and some extra functionality when connected to a PlayStation 5 and this TV is going to be a great fit for people who don’t just care about pure picture quality.

Hisense U9H and U8H: Mini LED for the masses

Hisense has been a strong player in the value market right alongside TCL. The company’s TVs continually deliver exceptional picture quality for highly competitive prices. This year, Hisense’s high-end TVs have us most excited thanks to the adoption of Mini LED backlighting.

The U8H is going to be the more mainstream option here. Starting at $1,100 for the 55-inch size, you’re still getting Mini LED backlighting and all the gaming features you could want. It boasts 1,500 nits of peak brightness, plenty for the majority of HDR content mastered for peaks between 600-1,000 nits.

Hisense brings Mini LED and all the gaming features you could want at a super compelling price point.

To make these TVs even more compelling, Hisense is deploying Google TV as its operating system this year instead of Android TV. Google TV has a more user-friendly interface and a home screen that aggregates content across apps. It’s a notable upgrade from the more simplistic Roku OS, and a godsend compared to the mediocre software found on LG and Samsung TVs. Given how frequently discounted Hisense TVs are, expect the U8H to be a popular choice for anyone who wants premium picture quality that doesn’t break the bank this year.

For those with a bigger budget and wall to match, the U9H sits at the top of Hisense’s 2022 lineup. It only comes in a 75-inch size for $3,200, fairly aggressive pricing given the specs on offer. Hisense claims the U9H peaks at 2,000 nits in HDR, and has the full suite of gaming features users should expect from their next-gen consoles like VRR and 120Hz refresh rates. This should be a very compelling option for premium buyers who want a big TV to put in a bright room.